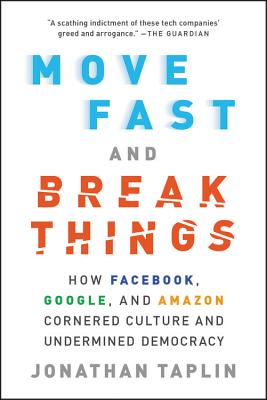 With the fallout from Cambridge Analytica still fresh in our minds, and the sense that our collective slide into tech dystopia is moving apace, Move Fast and Break Things provides an excellent primer on how we got to where we are, and why it didn't have to be this way. Come for the power-hungry data collectors lobbying for lax regulation, stay for the Silicon Valley bigwigs saying things like, "I no longer believe that freedom and democracy are compatible." This book connects a lot of important dots, and despite the urgency of its subject matter is a surprisingly enjoyable read.

— Steve
The book that started the Techlash.

A stinging polemic that traces the destructive monopolization of the Internet by Google, Facebook and Amazon, and that proposes a new future for musicians, journalists, authors and filmmakers in the digital age.

Move Fast and Break Things is the riveting account of a small group of libertarian entrepreneurs who in the 1990s began to hijack the original decentralized vision of the Internet, in the process creating three monopoly firms -- Facebook, Amazon, and Google -- that now determine the future of the music, film, television, publishing and news industries.

Jonathan Taplin offers a succinct and powerful history of how online life began to be shaped around the values of the men who founded these companies, including Peter Thiel and Larry Page: overlooking piracy of books, music, and film while hiding behind opaque business practices and subordinating the privacy of individual users in order to create the surveillance-marketing monoculture in which we now live.

The enormous profits that have come with this concentration of power tell their own story. Since 2001, newspaper and music revenues have fallen by 70 percent; book publishing, film, and television profits have also fallen dramatically. Revenues at Google in this same period grew from $400 million to $74.5 billion. Today, Google's YouTube controls 60 percent of all streaming-audio business but pay for only 11 percent of the total streaming-audio revenues artists receive. More creative content is being consumed than ever before, but less revenue is flowing to the creators and owners of that content.

The stakes here go far beyond the livelihood of any one musician or journalist. As Taplin observes, the fact that more and more Americans receive their news, as well as music and other forms of entertainment, from a small group of companies poses a real threat to democracy.

Move Fast and Break Things offers a vital, forward-thinking prescription for how artists can reclaim their audiences using knowledge of the past and a determination to work together. Using his own half-century career as a music and film producer and early pioneer of streaming video online, Taplin offers new ways to think about the design of the World Wide Web and specifically the way we live with the firms that dominate it.
Jonathan Taplin is the Director Emeritus of the USC Annenberg Innovation Lab, and a former tour manager for Bob Dylan and The Band, as well as a film producer for Martin Scorsese. An expert in digital media entertainment, Taplin is a member of the Academy Of Motion Picture Arts and Sciences and sits on the California Broadband Taskforce and Los Angeles Mayor Eric Garcetti's Council on Technology and Innovation.
Praise for Move Fast and Break Things
A New York Times Book Review Editors' ChoiceAn Amazon Best Business & Leadership Book of the year
Longlisted for Financial Times/McKinsey Business Book of the Year A strategy+business Best Business Book of the yearAn Inside Higher ED Best Book of the year


"Jonathan Taplin's Move Fast and Break Things argues that the radical libertarian ideology and monopolistic greed of many Silicon Valley entrepreneurs helped to decimate the livelihoods of musicians and is now undermining the communal idealism of the early internet."—Walter Isaacson, New York Times Book Review

"Taplin is uniquely poised to deliver us Move Fast and Break Things, a relentless critique that seeks to answer the above question of why the internet has hindered, rather than helped, those trying to make a living in the arts."
—New York Daily News

"A scathing indictment of these tech companies' greed and arrogance."
—The Guardian

"A necessary book that shows how the Internet revolution has damaged the way we interact as human beings, along with democracy itself."
—The Nation

"Taplin brings an informed perspective to his task, and an idiosyncratic background...[his] broader explanation of the upheaval in the music and media industries is illuminating."
—Wall Street Journal

"An impassioned new book...Taplin is at his strongest when he pulls back the curtain on vague and lofty terms such as 'digital disruption' to reveal the effects on individual artists...His prose is bold...his overall point is an important one."—Washington Post

"A solid qualitative and quantitative analysis...most every creator of music and film should welcome the clarion call of Taplin's book."
—Forbes.com

"A breakthrough, must-read book...a tour de force...If you want to understand what has happened to our country and where tech will take us in the era of Trump, put aside some time to read this book. It will take your breath away."
—AlterNet

"An excellent new book...Taplin makes a forceful and persuasive case that companies like Google and Facebook could employ their powerful artificial intelligence programs to prevent the infringement of existing copyright laws."
—Chicago Tribune

"Jonathan Taplin has a bone to pick with Silicon Valley, and it is a big one."—Huffington Post

"An absolute must-read for anyone who wants to gain a little savvy in the internet era."
—Newsweek

"A bracing, unromantic account of how the internet was captured...a timely and useful book. Taplin's book ranges widely over the digital landscape and ventures where most commentators rarely go."—The Guardian

"A stinging polemic that traces the destructive monopolization of the internet by Google and Facebook."—The Australian

"Comprehensive...Where Taplin excels is by putting all this into the context of the changing global economy."—The Times of London

"Required reading...a nuanced look at the downside of what is glibly tossed around as 'disruption' by various cyber-messianic blowhards."—Charles Pierce, Esquire.com

"An important new book...[Taplin is] a smart and thoughtful student of the cultural landscape."—Peter Bart, Deadline Hollywood

"Insightful.... Taplin provides a keen, thorough look at the present and future of Americans' lives as influenced and manipulated by the technological behemoths on which they've come to depend. His work is certainly food for thought."
—Publishers Weekly

"A powerful argument for reducing inequality and revolutionizing how we use the Web for the benefit of the many rather than the few."
—Kirkus Reviews

"The book to read right now is Move Fast And Break Things, by Jonathan Taplin."—Rod Dreher, The American Conservative

"Jonathan Taplin's brave new book unmasks a grid of high tech corporate domination that didn't have to be but that now threatens democracy itself. Like the great muckrakers of a century ago, Taplin explains clearly how that domination works and challenges us to do something about it. Our future may well depend on whether we heed him."
—Professor Sean Wilentz, author of The Rise of American Democracy

"Taplin's new book is an eye-opening portrait of the adversaries in the war over control of new ideas and big data, and what it will take to win."
—IP Watchdog

"Taplin does a brilliant job of making his case.... If you're interested in how technology is shaping the world around us, this book is well worth reading."
—Evening Standard (UK)

"In this incisive work, Taplin makes the case that Internet monopolies have reshaped the online marketplace, via data mining and advertising, to enormous, unconstitutional profit....Taplin draws on his own experience in the entertainment industry, wherein he worked as a tour manager for artists like Bob Dylan and the Band, and as a producer for Scorsese. He employs a measured, persuasive tone, and makes a compelling case for re-envisioning the Internet and reinstating value in creating meaningful art. He considers solutions such as a universal basic income, artist co-ops and greater emphasis on community in order to salvage creative cultural output and assess its value....Taplin's topic is as important as his arguments are enlightening."
—Shelf Awareness

"Taplin writes eloquently and passionately about the human toll of the Internet age.... This is not a "technology book" because that term would be far too limiting. By reading Move Fast, we can understand much of the acceptance of Donald Trump in 2016."
—Jon Friedman

"Jon Taplin's Move Fast and Break Things is a provocative and long overdue examination of the giant Internet monopolies that have come to dominate our economy, politics and culture with grave consequences for the quality of our lives. Well written and highly entertaining, this is an ideal book for the lay reader and for students. I like it so much I am using it in my classes this year."
—Robert W. McChesney, co-author, People Get Ready: The Fight Against a Jobless Economy and a Citizenless Democracy

"Jonathan Taplin, more than anyone I know, can articulate the paralyzing complexities that have arisen from the intertwining of the tech and music industries. He counters the catastrophic implications for musicians with solutions and inspiration for a renaissance. He shows the way for artists to reclaim and reinvent subversion, rather than be in servitude to Big Tech. Every musician and every creator should read this book."
—Rosanne Cash, Grammy-winning Singer and Songwriter

"Move Fast and Break Things goes on my bookshelf beside a few other indispensable signposts in the maze of the 21st Century--The Technological Society by Jacques Ellul and The Medium is the Message by Marshall McLuhan. I pray the deepest and highest prayer I can get to that this clarion warning is heeded. The survival of our species is at stake."
—T Bone Burnett, Grammy-winning producer and musician

"In a remarkably innovative and precise amalgam of political economy and cultural criticism, Taplin delivers a devastating critique of our "knowledge-based" economy. This book is a profound analysis of the ruinous impact of the internet economy on the promise of American life."
—Benjamin Schwarz, national editor, The American Conservative, former national editor, The Atlantic

"This is an essential book and a singular hybrid--lucid alternate history of our digital transformation, digital memoir of a pioneering culture industry player, and bracing polemic on how our culture was hijacked and might still be redeemed. And my reaction to Move Fast and Break Things was a three-party hybrid too--provoked, enlightened and inspired."
—Kurt Andersen, host of the Peabody-winning public radio program Studio 360

"Jonathan Taplin's new book could not be more timely. Twenty years after the initial euphoria of the Web, ten years after the invention of social media, it's time to stop breaking things and start thinking seriously about the new habitat we're creating. Move Fast and Break Things provides a blueprint for a future that humans can live in."
—Frank Rose, author of The Art of Immersion