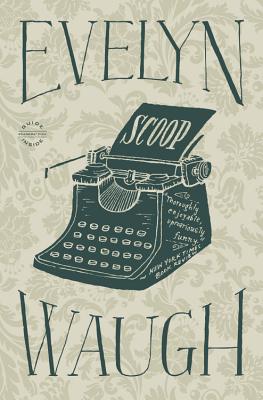 By Evelyn Waugh
$16.99
Availability to be confirmed

Selected by the Modern Library as one of the 100 best novels of the century, Scoop is a "thoroughly enjoyable, uproariously funny" satire of the journalism business (New York Times).

Lord Copper, newspaper magnate and proprietor of the Daily Beast, has always prided himself on his intuitive flair for spotting ace reporters. That is not to say he has not made the odd blunder, however, and may in a moment of weakness make another. Acting on a dinner party tip from Mrs. Algernon Stitch, Lord Copper feels convinced that he has hit on just the chap to cover a promising war in the African Republic of Ishmaelia.

So begins Scoop, Waugh's exuberant comedy of mistaken identity and brilliantly irreverent satire of the hectic pursuit of hot news.
"Its timelessness is both hilarious and depressing." --Seth Meyers

Evelyn Waugh (1903-1966), whom Time called "one of the century's great masters of English prose," wrote several widely acclaimed novels as well as volumes of biography, memoir, travel writing, and journalism. Three of his novels, A Handful of Dust, Scoop, and Brideshead Revisited, were selected by the Modern Library as among the 100 best novels of the twentieth century.

"Ingenious, satirical, extremely funny...Mr. Waugh's ribald wit spurts in a brisk unininterrupted flow upon the caprices of sensational journalism. Scoop is entertaining reading all through, with more than a single good laugh or chuckle to the page."—Times Literary Supplement

"Urban malice as bright and sharp as tin; it is not only delightful but true."—Otis Ferguson, The New Republic

"With this book, England's wittiest novelist sets a new standard for comic extravaganza....The one real message concerning Scoop is that it is thoroughly enjoyable, uproariously funny, and that everyone should get a copy at once."—Robert Van Gelder, New York Times Book Review