Mark Twain's America: A Celebration in Words and Images (Hardcover) 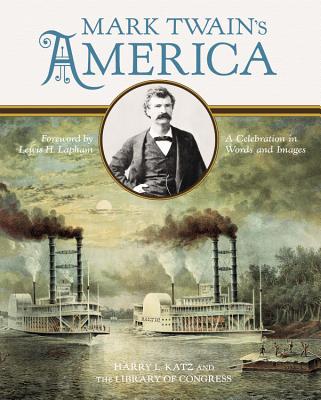 Mark Twain's America: A Celebration in Words and Images (Hardcover)


Availability to be confirmed
Mark Twain is an American icon. We now know him as the author of classics, but in his day he was a controversial satirist and public figure who traveled the world and healed post-Civil War America with his tall tales, witty anecdotes, and humorous but insightful novels and stories. Twain's legacy continues to flourish over 100 years after his death.

Covering the years between 1850 and 1910, the book gives readers an intimate view of Twain's many roles in life: Mississippi river boat pilot, California gold prospector, "printer's devil" at a small-town newspaper, muckraking journalist, novelist, public speaker extraordinaire, our first major celebrity author. Through letters, political cartoons, photographs and more, Mark Twain's America offers an inside look into Twain's life as well as the literary. social, and political life of America during his time.
Author and curator Harry L. Katz is a former Head Curator in the Division of Prints & Photographs at the Library of Congress. His books include Civil War Sketch Book, Baseball Americana, and Herblock.

The founder and editor of Lapham's Quarterly (2007-), Lewis Lapham was for thirty years (1976-2006), editor of Harper's Magazine. The author of thirteen books, among them Money and Class in America, Theater of War, The Wish for Kings, Lapham in 2007 was inducted into the American Society of Magazine Editor's Hall of Fame. Educated at Yale and Cambridge Universities, he lives in New York City.
"Mark Twain's America is a salute from one American institution to another."—James H. Billington, Librarian on Congress

"Mark Twain's America reminds us why George Bernard Shaw called Twain 'America's Voltaire.' The man from Hannibal was a powerful voice for social change who wrote and spoke against the corruption he saw in our government, a champion of the values he learned as a child on the Missouri frontier."—Hal Holbrook, creator of Mark Twain Tonight!

"An extraordinarily good book...It's a must, and not just for Twainiacs."
—Marsha Dubrow, Examiner.com