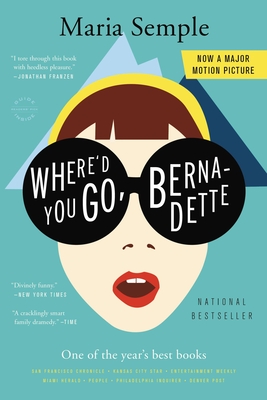 
On Our Shelves Now
A misanthropic matriarch leaves her eccentric family in crisis when she mysteriously disappears in this "whip-smart and divinely funny" novel that inspired the movie starring Cate Blanchett (New York Times).

Bernadette Fox is notorious. To her Microsoft-guru husband, she's a fearlessly opinionated partner; to fellow private-school mothers in Seattle, she's a disgrace; to design mavens, she's a revolutionary architect; and to 15-year-old Bee, she is her best friend and, simply, Mom.

Then Bernadette vanishes. It all began when Bee aced her report card and claimed her promised reward: a family trip to Antarctica. But Bernadette's intensifying allergy to Seattle -- and people in general -- has made her so agoraphobic that a virtual assistant in India now runs her most basic errands. A trip to the end of the earth is problematic.

To find her mother, Bee compiles email messages, official documents, and secret correspondence -- creating a compulsively readable and surprisingly touching novel about misplaced genius and a mother and daughter's role in an absurd world.
Maria Semple is the author of This One Is Mine and Today Will Be Different. Before turning to fiction, she wrote for Mad About You, Ellen, and Arrested Development. Her writing has appeared in The New Yorker. She lives in Seattle.
"This divinely funny, many-faceted novel...leaves convention behind. Instead, it plays to Ms. Semple's strengths as someone who can practice ventriloquism in many voices, skip over the mundane and utterly refute the notion that mixed-media fiction is bloggy, slack or lazy.... The tightly constructed WHERE'D YOU GO, BERNADETTE is written in many formats-e-mails, letters, F.B.I. documents, correspondence with a psychiatrist and even an emergency-room bill for a run-in between Bernadette and Audrey. Yet these pieces are strung together so wittily that Ms. Semple's storytelling is always front and center, in sharp focus. You could stop and pay attention to how apt each new format is, how rarely she repeats herself and how imaginatively she unveils every bit of information. But you would have to stop laughing first."—Janet Maslin, The New York Times

You don't have to know Seattle to get Maria Semple's broadly satirical novel.... Underlying the nontraditional narrative are insights into the cost of thwarted creativity and the power of mother-daughter bonds, although a reader may be having too much fun to notice."—O, The Oprah Magazine

"Delightfully droll.... Semple...cuts a wry slice of a life-one that's populated by private school helicopter parents, obsessively eco-conscious neighbors, and green-juice swilling, TED-talking husbands-and one that's sharp enough to make us feel slightly relieved about not having to live anywhere quite so bucolic."—Megan O'Grady, Vogue

"The characters in Where'd You Go, Bernadette may be in real emotional pain, but Semple has the wit and perspective and imagination to make their story hilarious. I tore through this book with heedless pleasure."
—Jonathan Franzen, author of Freedom

"There's a lot to like in Semple's charming novel, including the vivacious humor and the lesson that when creative forces like Bernadette stop creating, they become 'a menace to society.' Even more appealing is the mutually adoring mother-daughter relationship at its warm heart."—Heller McAlpin, NPR

"In her second novel...Semple pieces together a modern-day comic caper full of heart and ingenuity....a compelling composite of a woman's life-and the way she's viewed by the many people who share it. As expected from a writer who has written episodes of Arrested Development, the nuances of mundane interactions are brilliantly captured, and the overarching mystery deepens with each page, until the thoroughly satisfying dénouement."—Publisher's Weekly (Starred Review)

"Agoraphobia and Antarctica are among the elements in Maria Semple's terrific novel."—Parade

"Warm, dark, sad, funny-and a little bit screwball.... This is an inventive and very funny novel that gets bonus points for transcending form."—Susan Coll, The Washington Post

"[A] cracklingly smart family dramedy.... [I was] stunned and transported by this extraordinarily powerful and intelligent novel."—Lev Grossman, Time

"With its big heart set on acceptance, BERNADETTE feels something like coming home."—Paul Constant, The Stranger

"A shrewd yet compassionate portrait of family dysfunction and the volatility of genius in laugh-out-loud, irresistibly high-spirited prose.... WHERE'D YOU GO, BERNADETTEtakes readers on an original and movingly imaginative adventure."—Catherine Straut, Elle

"Semple's ear for satirizing this world is sharp and scathingly funny; she could probably turn her novel into a stand-up act."—Stewart Oksenhorn, The Aspen Times

"Semple, once a writer for Arrested Development, picks apart the mundane interactions of everyday life with a hilarious hand, and you're sure to be as swept up in this witty, inventive mystery as we were."—Emily Temple, Flavorpill

"WHERE'D YOU GO, BERNADETTE is fresh and funny and accomplished, but the best thing about it was that I never had any idea what was going to happen next. It was a wild ride..."—Kate Atkinson, author of Case Histories and Started Early, Took My Dog

"Maria Semple dissects the gory complexities of familial dysfunction with a deft and tender hand. WHERE'D YOU GO, BERNADETTE is a triumph of social observation and black comedy by a skillful chronicler of moneyed malaise."—Patrick deWitt, author of The Sisters Brothers

"Semple paints each character with depth and tenderness while keeping the tone upbeat; no easy feat for a novel about a mother who pulls a disappearing act."—Korina Lopez, USA Today

"Utterly delightful....Semple used to write for the revered cult hit Arrested Development, and she brings plenty of squirming comedy to the novel, which manages to be that rare good read that actually makes you feel good at the end. Her send-up of Seattle is hilarious, with its Victims Against Victimhood support groups, moms offering organic gardeners swiss chard in lieu of payment, and teachers who are so PC that fourth graders are expected to seriously debate the pros and cons of the Chinese occupation of Tibet. But the heart of the book belongs to Bee, who, as an admissions counselor puts it, tests off the charts for grit and poise; and her mother, who, for all her neuroses, did a bang-up job of turning out one terrific kid."—Yvonne Zipp, Christian Science Monitor

"A touching and hilarious portrait of the anxiety producing, high powered Seattle lifestyle of a somewhat eccentric family of three (and their dog Ice Cream).... This is a great read, well written and populated by characters you care about deeply."—Ruth Freeman, The Norwalk Citizen

"Stands to become a cult favorite.... Like Jane Austen-who set the gold standard for social satire-Semple's most ridiculous characters are convinced that they're the normal ones, and it's wonderful fun to watch as they behave abominably, believing themselves blameless.... Semple has a keen ear for the nuances of different voices, and it's a joy to get to know these people.... Bernadette is...marvelous. Her rants read like the best comedy routines.... It's the rare book that actually deserves the term "laugh-out-loud funny," but I found myself reading passages from almost every page to anyone who would listen, even as I could barely articulate the words through my own laughter."—Malena Watrous, San Francisco Chronicle

"Intertwined with the funny stuff is the heartfelt story of a personal crisis of a creative talent who's slipped off the rails... Bernadette's journey is fresh, funny, and thought provoking."—Anne Payne, The Florida Times-Union

"I don't even know where to begin with how fantastic it is.... I ate up the Microsoft-obsessed setting and the fabulous, mad-but-not-really Bernadette. Go, get it, thank me later."—Megan Angelo, Glamour.com

"If wacky, anxiety-prone geniuses are some of your favorite people, then pick up Maria Semple's WHERE'D YOU GO, BERNADETTE to add Bernadette Fox and her family to your list of hilarious companions. Bernadette and company don't mind cursing, so if you do, please be warned. But if not, then you've got a stamped passport to Semple's expertly crafted and rollicking, laugh-till-you-cry adventure that will have you tearing through the pages to find out if Bernadette is gone for good."—Dawn Andrus Paine, Daily Herald (Utah)

"Well-plotted and masterfully satirical.... WHERE'D YOU GO, BERNADETTE is really, really funny, and not in the usual way that suggests the author is trying to be funny to cover up their deficiencies in plot or styling. As it turns out, Maria Semple is both a good writer and a funny writer, but she prefers to be the latter."—Janet Potter, The Millions

"Sublime..."—Frank Bruni, on his blog for The New York Times

"If Gillian Flynn's Gone Girl represented the dark heart of the summer literature, Maria Semple's...BERNADETTE embodies the sunnier, funnier side.... Semple has a flair for satire and screwball jinks, and she has produced a great gift to avid readers: a book that you never want to finish reading."—Connie Ogle, The Miami Herald

"An epistolary novel for the twenty-first century.... Paced like a beach read, BERNADETTEhas a scathing wit and a casual storytelling style that pulls the reader in and forces her to listen."—Capital Times' blog

"One of the funniest stories you can read this year."—Donna Liquori, The Albany Times Union

"A powerful mosaic of mental illness, artistic temperament, and family melodrama.... Semple's background in television and comedy... provide[s] the foundation for this subversively funny novel and its all-too-rare blend of humor and heart.... In a time when everything is a version of something else, how extraordinary-and exciting-to read a novel that subverts conventions to create an experience that feels so fresh."—Jeremy Medina, The L Magazine

"This book is hysterical, kind of wacky, and utterly original."—Entertainment Weekly's "The Bullseye"

"One of the big burst-of-oxygen books this year.... clever and inventive but also genuine and heartfelt."—Gillian Flynn for The New York Times' "Inside the List"

[A] clever story of family dysfunction."—Dailycandy

"Marketed as a beach read, give this to your soccer moms who have come to the realization that maybe they aren't 'all that.' With a Tiffany-blue cover, it's wrapped perfectly!"—Michelle Will, The Kitsap Sun

"In appearance, this may be the perfect beach read to go with your retro bikini. Inside the cover, Semple's novel is funny, suspenseful, multi-faceted, multi-media, and sad, too - spot-on social commentary..."—Jen Doll, The Atlantic Wire

"It's the first epistolary novel I've ever loved, and sharp as hell."—Emma Straub for Salon

"Stunningly astute.... Beyond its ethnographic value as a snapshot of the underlying hypocrisies of the way the top five percent lives now, WYGB delivers at least one knowing chuckle per page in an innovative structure worthy of its own TED Talk."—Christina Spines, Word & Film

"This funny and heartfelt novel has it all: love, mystery, infidelity, and humor. The complications of human life are on full display and examined with absurdity."—Laura Anderson, BLOGCRITICS.ORG

"The romp that ensues throughout Semple's sophomore novel is cleverly crafted, and allows the reader to develop strong ties to the author's masterfully drawn...[and] quirky characters."—Shelly Walston, The Wichita Eagle

"Really, really funny.... A novel of refuge if you find yourself, like Bernadette, bogged down by the peskiness of privilege."—Stacey Pavlick, Spectrum Culture

"Fast-paced and compulsively readable...and beneath its nimble storytelling is a resonant exploration of a mother and daughter's unbreakable bond."—Elliott Holt, The Morning News Tournament of Books

"A lovely story of a creative lull."—Jessa Crispin, Architect Magazine

"A tremendously entertaining work of social satire combined with a mystery that kept me wondering what would happen next right up to the end."—Boing Boing

"To say this book is quirky would be something of an understatement. It is also very funny, snarky, smart, occasionally confusing, and cleverly constructed."—Aspen Daily News

"Funniest book since the invention of the printing press."—Gary Shteyngart for Entertainment Weekly