Friends Like These: My Worldwide Quest to Find My Best Childhood Friends, Knock on Their Doors, and Ask Them to Come Out and Play (Hardcover) 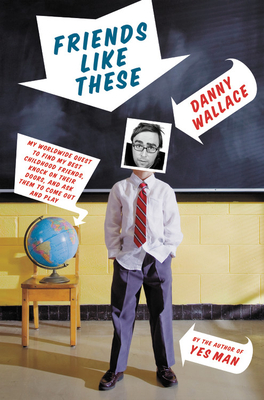 “Danny Wallace both inspires and amuses in the chronicle of his journey into his own past. More moving and serious than his previous books, Friends Like These still manages to find humor and wonder in the human journey.”
— William Graff, UCLA Bookzone, Los Angeles, CA

Danny Wallace has friends. He has a wife and goes to brunch, and his new house has a couch with throw pillows. But as he nears 30, he can't help wondering about his best childhood friends, whose names he finds in a long-forgotten address book. Where are they now-and where, really, is he?

Acting on an impulse we've all had at least once, he travels from London to Berlin, Tokyo, Australia, and California, risking rejection and ridicule to show up on his old pals' doorsteps. Memories of his 1980s childhood-from Michael Jackson to Ghostbusters-overwhelm him as he meets former buddies who have blossomed into rappers and ninjas, time-traveling pioneers, mediocre restaurant managers, and even Fijian royalty.

Danny's attempt to re-befriend them all gives remarkable new resonance to the age-old mantra, "friends forever!"

Danny Wallace is the author of The Yes Man, which was made into a film starring Jim Carrey. He has hosted various television shows and starred in BBC documentaries. Currently, he has a weekly radio show on XFM in London, and three of his books have been bestsellers in the UK.