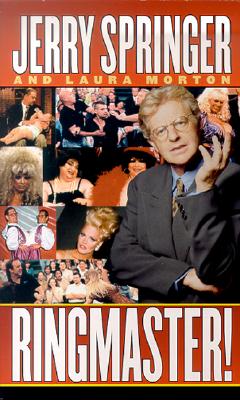 For the first time ever, Jerry Springer dares to remove the bleeps and bars that hide away all of the real action, and takes you behind the scenes of the circus maximus-known as "The Jerry Springer Show." From his years as a politician and Emmy-winning journalist to becoming the host of America's most watched and controversial talk show-here is an uncensored and uninhibited look at the rise of Jerry Springer and the craziest show on earth.

It could only happen on "The Jerry Springer Show!"

"Phone sex killed my husband"
"I do drugs at church"
"Making love behind bars"
"My parrot runs my life"
"The man with eight wives"
"I'm making my first adult film"
"I'm 12 and I take care of my 680-pound mom"
"I'm a breeder for the klan"
"I'm 7 months pregnant and still stripping"
"I cut off my manhood"
"I broke the world's sex record"
"I stole my 12-year-old's boyfriend"
"Paternity results: I slept with two brothers"
"I'm pregnant by a transsexual"
"My pimp runs my family"
"I married a horse"

Jerry Springer was born in London in 1944 and arrived in New York City as an immigrant at the age of five. He earned a B.A. in political science from Tulane University, a law degree from Northwestern, and soon entered the political arena. He served as Cincinnati's Council-at-Large for five years and in 1977 became one of the country's youngest mayors. Moving into he field of broadcasting, Springer became Cincinnati's top-rated news anchor and won ten Emmy Awards for his work. "The Jerry Spring Show "premiered in 1991 and today is broadcast all over the world.