That Night: A Novel (Paperback) 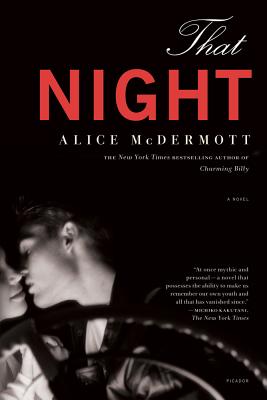 That Night: A Novel (Paperback)

A Finalist for the Pulitzer Prize and the National Book Award

It is high summer, the early 1960s. Sheryl and Rick, two Long Island teenagers, share an intense, all-consuming love. But Sheryl's widowed mother steps between them, and one moonlit night Rick and a gang of hoodlums descend upon her quiet neighborhood. That night, driven by Rick's determination to reclaim Sheryl, the young men provoke a violent confrontation, and as fathers step forward to protect their turf, notions of innocence belonging to both sides of the brawl are fractured forever. Alice McDermott's That Night is "a moving and captivating novel, both celebration and elegy…a rare and memorable work" (The Cleveland Plain Dealer).

“At once mythic and personal---a novel that possesses the ability to make us remember our own youth and all that has vanished since.” —Michiko Kakutani, The New York Times

“A strong, eloquent novel…McDermott writes clean, simple prose that serves her story beautifully. This novel is as carefully constructed as a poem, giving off a lustrous glow, and is poignant in the telling.” —People

“Voiced with musical economy…the author's perceptions of suburban life have a rich detail of the quality of a Cheever or an Updike.” —Los Angeles Times

“McDermott is a spellbinder, adding a cachet of mystery and eloquence to common occurrences….She has taken a suburban teenage romance and pregnancy and infused it with the power, the ominousness, and the star-crossed romanticism of a contemporary Romeo and Juliet.” —Chicago Tribune

“To enter the world of this incantatory novel is to palpably recall almost against one's will the rash, embattled strivings and disillusionments of first love.” —The Washington Post Book World