Kill Bin Laden: A Delta Force Commander's Account of the Hunt for the World's Most Wanted Man (Mass Market Paperbound) 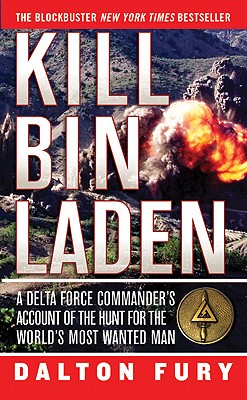 Kill Bin Laden: A Delta Force Commander's Account of the Hunt for the World's Most Wanted Man (Mass Market Paperbound)

The mission was to kill the most wanted man in the world one of such magnitude that it couldn't be handled by just any military or intelligence force. The best America had to offer was needed. The task was handed to roughly forty members of America's supersecret counterterrorist unit: the elite and mysterious unit Delta Force. This is the true story of one Delta Force commander's hunt to

The first eyewitness account of the Battle of Tora Bora, this is also the first book to detail just how close Delta Force came to capturing bin Laden, how close U.S. bombers and fighter aircraft came to killing him, and exactly why he slipped through our fingers. With "KILL BIN LADEN," Dalton Fury offers an extremely rare inside look at one of the most important special operations missions of all time.

Dalton Fury was the senior ranking military officer at the Battle of Tora Bora. As a Delta troop commander he led ninety-one other Western special operations commandos and support personnel and helped author, along with some of Delta's most talented sergeants, the tactical concept of the operation to hunt and kill bin Laden. Dalton Fury passed away in 2016.

“A riveting account of one of the most important—but also least understood—battles in the war on terror.” —Time

“Kill Bin Laden is one of the most detailed and informative descriptions of a battle forgotten by most Americans, but one that was truly the closest the West got to bin Laden since 9/11.”—Military.com

“The best book ever written by a special operations insider. This guy Fury’s men are the real-deal Delta Force operators. You need to know what happened at Tora Bora, and this great book will tell you.” —Colonel David Hunt, U.S. Army (Ret.), New York Times bestselling author of They Just Don’t Get It and On the Hunt, and FOX News special ops and counterterrorism analyst

“Special Forces Operational Detachment-Delta is without doubt one of the most fearsome military units ever assembled. Delta officer Dalton Fury didn’t just take part in the battle of Tora Bora, he commanded all the special operations troops, both U.S. and British, who were there. Kill Bin Laden is a proud, riveting, warts-and-all account of that battle, one of the most important special operations missions of all time.” —Michael Smith, author of Killer Elite: The Inside Story of America’s Most Secret Special Operations Team

“An important, must-read book about real warriors. A story that so positively reflects what on the ground decision making, professional acceptance of risk and maximizing interagency cooperation can do. Dalton Fury shows us with amazing detail and insight what highly trained and motivated special operators can accomplish successfully in combat out of all proportion to their numbers.”—Cofer Black, former chief of the Central Intelligence Agency’s Counter Terrorist Center

“The most compelling and comprehensive account of the Battle of Tora Bora that I have read, heard, or seen in any format.”—COL(R) John T. Carney, author of No Room For Error and President/ CEO of the Special Operations Warrior Foundation