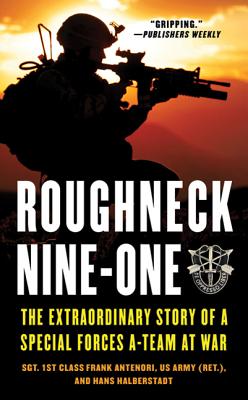 Along the way, they endured a U.S .Navy F-14 dropping a 500-pound bomb on supporting Kurdish Peshmerga fighters, the ever-present threat of WMDs, and countless other deadly obstacles.

This is the never-before-told, unsanitized story of how one Special Forces A-team recruited and organized, trained and eventually fought—and won—a legendary conflict that will influence American military doctrine for years to come.

SFC Frank Antenori, US Army (Retired) joined the Special Forces in 1988. Since then, he has participated in numerous operations in over thirty-four countries and has been awarded numerous decorations and citations, with seven received for combat actions. He is author of Roughneck Nine-One.

Hans Halberstadt has authored or coauthored more than fifty books, most on military subjects, especially US special operations forces, armor, and artillery. His books include Trigger Men: Shadow Team, Spider-Man, the Magnificent Bastards, and the American Combat Sniper. He served in the US Army as a helicopter door gunner in Vietnam.

“Roughneck Nine One is a rare and unexpectedly personal look into the elite world of a Special Forces A-Team.” —Jack Coughlin, Gunnery Sergeant, USMC, and New York Times bestselling author of Shooter

“A terrific inside look at a Special Forces A-Team at war. Frank Antenori didn't pull any punches in combat, and he doesn't in this book either.” —Sean Naylor, New York Times bestselling author of Not a Good Day to Die

“Roughneck Nine One, written with retired Green Beret SFC Frank Antenori, is clearly Hans Halberstadt's best work yet! He brings to the table his exceptional background and years of well-honed expertise in writing books on special operations. This, combined with Antenori's ""eyes on, ground truth"" Special Forces soldier's experience, perspective, and insights, produces a truly groundbreaking, first-of-a-kind book. Roughneck Nine One takes you behind the scenes into the struggles, complications, preparation, training, and turf issues faced by our most elite forces as they go into battle. Ultimately your nerves will be tested as Antenori's Special Forces A-Team, searching for a fight, finds themselves in front of a large enemy force, out-manned, out-gunned, and largely unsupported. What's more...they plan on attacking!” —Col. Gerald Schumacher, US Army Special Forces (Retired), author of To Be a US Army Green Beret and A Bloody Business: America’s War Zone Contractors and the Occupation of Iraq

“Frank Antenori and Hans Halberstadt team up to give readers an updated version of the classic ‘David and Goliath’ story, a powerful no-holds barred, first-hand account of actual ground combat in Iraq. Roughneck Nine One most definitely captures the professionalism, comradeship, self-sacrifice, and courage that define the heart and soul of America’s finest warriors---US Army Special Forces. A must-read book!” —Col. Tom Yarborough, USAF, author of Da Nang Diary