City of Gold: Dubai and the Dream of Capitalism (Hardcover) 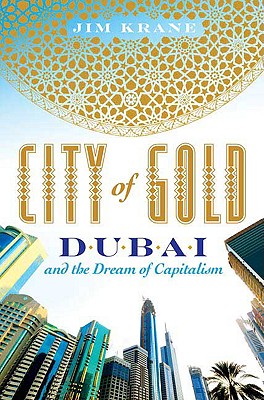 By Jim Krane
$27.99
Availability to be confirmed

The city of Dubai, one of the seven United Arab Emirates, is everything the Arab world isn’t: a freewheeling capitalist oasis where the market rules and history is swept aside. Until the credit crunch knocked it flat, Dubai was the fastest-growing city in the world, with a roaring economy that outpaced China’s while luring more tourists than all of India. It’s one of the world’s safest places, a stone’s throw from its most dangerous. In City of Gold, Jim Krane, who reported for the AP from Dubai, brings us a boots-on-the-ground look at this fascinating place by walking its streets, talking to its business titans, its prostitutes, and the hard-bitten men who built its fanciful skyline. He delves into the city’s history, paints an intimate portrait of the ruling Maktoum family, and ponders where the city is headed. Dubai literally came out of nowhere. It was a poor and dusty village in the 1960s. Now it’s been transformed into the quintessential metropolis of the future through the vision of clever sheikhs, Western capitalists, and a river of investor money that poured in from around the globe. What has emerged is a tolerant and cosmopolitan city awash in architectural landmarks, luxury resorts, and Disnified kitsch. It’s at once home to America’s most prestigious companies and universities and a magnet for the Middle East’s intelligentsia. Dubai’s dream of capitalism has also created a deeply stratified city that is one of the world’s worst polluters. Wild growth has clogged its streets and left its citizens a tiny minority in a sea of foreigners. Jim Krane considers all of this and casts a critical eye on the toll that the global economic downturn has taken on a place that many tout as a blueprint for a more stable Middle East.  While many think Dubai’s glory days have passed, insiders like Jim Krane who got to know the city and its creators firsthand realize there’s much more to come in the City of Gold, a place that, in just a few years, has made itself known to nearly every person on earth.

Jim Krane, an award-winning journalist, was the AP's Persian Gulf Correspondent, responsible for coverage in all six Gulf Arab countries. He has also written about Dubai for "The Economist "and the "Financial Times." Previously, he was an AP Baghdad Correspondent and New York--based business writer. He lives in Cambridge, England, with his wife and son.

"“City of Gold” offers a vivid guide to how a Bedouin tribe turned a mud village on a scrap of desert into a glittering city state."--Bloomberg "This landmark work is recommended to those interested in the history, politics, and economics of the Middle East; an excellent choice for anyone who wishes to learn more about Dubai."--Library Journal "The modern city-state of Dubai exists largely because two men willed it so. Through a combination of prescient investment of resources, grandiose vision and the freedoms of absolute rule, the late Sheikh Rashid and his son (and current ruler) Sheikh Mohammed transformed the backwater village into a global powerhouse “erupting onto the earth.” Mohammed's “ideas are so stamped on the landscape that two of his poems are being written on the sea as a group of [artificial] islands.” Dubai-based journalist Krane does a superb job of conveying the near-manic atmosphere swirling around the creation of the world's tallest building (half a mile high), first indoor ski slope (in a mall) and—incidentally—the world's largest carbon footprint, revealing the creativity and tolerance that characterize a city where 95% of its residents are foreigners, as well as the inevitable costs of such lavish ambition. Environmental needs have been ignored (another island was built atop a coral reserve, and migrant laborers and sex workers face routine abuse and exploitation. A fascinating study of a small nation that has taken the ideas of modernization and capitalism to their outer limits."--Publishers Weekly, Starred Review "The author hits his stride when he assesses Dubai’s current ruler, Sheikh Mohammed bin Rashid Al Maktoum. He proceeds to examine this small emirate with admirable even-handedness and good humour. But Krane also writes movingly of the conditions of the Indian, Pakistani and Bangladeshi workers who have built Dubai."--The Atlantic

“The history of a little Emirate’s epic transformation, from an impoverished pearling enclave, to the shining city on the hill, is revealed in full detail. Jim Krane is a great reporter, whose journalistic credentials are brought to bear in this unique work that is infused with facts, ample history, emotion and stunning narratives.  He leads his audience into the nooks and crannies of the "unknown"  Dubai, to reveal the humanity and intrigue that pulsates beneath the surface. He shows how powerful persons with a global reach collaborated to build an economic gem out of the desert. This is a fast-moving Arabian tale, but very much a modern one; not only laden with facts, it is a guidebook and cautionary tale for other developing nations in their quest to rapidly achieve the Western dream.”-- Justin Dargin, Harvard University - author of Desert Dreams and The Dolphin Project: The Development of a Gulf Gas Initiative

"Dubai is fortunate to have as skilled and passionate a chronicler as Jim Krane. The city leaps off these pages with panache, brassiness, splendor and suffering. There is no better book about Dubai, and there may never be." --Jon Alterman, Director of the Middle East Program at CSIS and author of The Vital Triangle: China, The United States and The Middle East

“How did one of the planet’s last unexplored wastelands, for millennia ignored by history, become in just a few short decades the playground of the unimaginably rich? In City of Gold, Jim Krane traces the fascinating and long overlooked history of Dubai, from pirate battles and eccentric British explorers to the glittering spires of a metropolis that emerged from nowhere, in prose as spare and enchanting as a desert fairy tale.”--James Hider, author of The Spiders of Allah: Travels of an Unbeliever on the Frontline of Holy War and Mideast correspondent The Times of London

“A marvelous book. Beautifully written! Jim Krane has written a fascinating account of a Middle East we rarely get to hear about.  Jim Krane’s book on Dubai’s rise and fall -- in this era of global financial crisis -- is a cautionary tale for us all.”--Lourdes Garcia-Navarro, NPR Middle East Correspondent