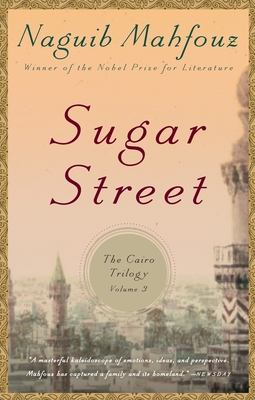 By Naguib Mahfouz
$17.00
Availability to be confirmed

This is book number 3 in the The Cairo Trilogy series.

Sugar Street is the final novel in Nobel Prize-winner Naguib Mahfouz’s magnificent Cairo Trilogy, an epic family saga of colonial Egypt that is considered his masterwork.

The novels of the Cairo Trilogy trace three generations of the family of tyrannical patriarch al-Sayyid Ahmad Abd al-Jawad, who rules his household with a strict hand while living a secret life of self-indulgence. Sugar Street brings Mahfouz’s vivid tapestry of an evolving Egypt to a dramatic climax as the aging patriarch sees one grandson become a Communist, one a Muslim fundamentalist, and one the lover of a powerful politician. Filled with compelling drama, earthy humor, and remarkable insight, Mahfouz’s Cairo Trilogy is the achievement of a master storyteller.

“A masterful kaleidoscope of emotions, ideas, and perspective. Mahfouz has captured a family and its homeland at one gloriously varied moment in a cycle.” —Newsday

“A resonant tour de force, a superbly written novel. One of the most enjoyable books of recent memory.” —St. Louis Post-Dispatch

“Mahfouz presents us with a different concept of the world and makes it real. His genius is not just that he shows us Egyptian colonial society in all its complexity; it is that he makes us look through the vision of his vivid characters and see people and ideas that no longer seem so alien.” —Philadelphia Inquirer