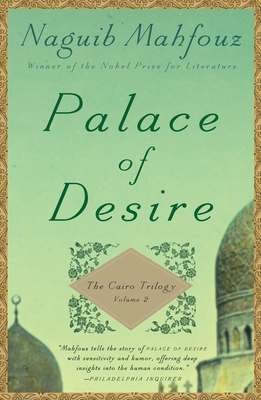 This is book number 2 in the The Cairo Trilogy series.

Palace of Desire is the second novel in Nobel Prize-winner Naguib Mahfouz’s magnificent Cairo Trilogy, an epic family saga of colonial Egypt that is considered his masterwork.

The novels of the Cairo Trilogy trace three generations of the family of tyrannical patriarch al-Sayyid Ahmad Abd al-Jawad, who rules his household with a strict hand while living a secret life of self-indulgence. In Palace of Desire, his rebellious children struggle to move beyond his domination, as the world around them opens to the currents of modernity and political and domestic turmoil brought by the 1920s.

“Mahfouz tells the story of Palace of Desire with sensitivity and humor, offering deep insights into the human condition.” —Philadelphia Inquirer

“All the magic, mystery, and suffering of Egypt in the 1920s are conveyed on a human scale.” —The New York Times Book Review

“A grand novel of ideas. . . . A marvelous read.” —The Washington Post

“In Palace of Desire we see the intricate and complex tragedy of patriarchy working itself out through succeeding generations.” —Chicago Tribune