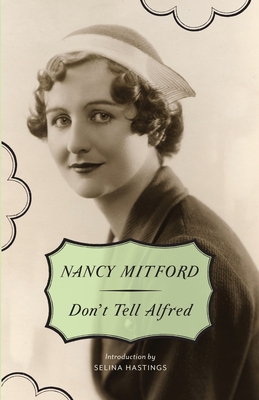 This is book number 3 in the Radlett and Montdore series.

Fanny Wincham—last seen as a young woman in The Pursuit of Love and Love in a Cold Climate—has lived contentedly for years as housewife to an absent-minded Oxford don, Alfred. But her life changes overnight when her beloved Alfred is appointed English Ambassador to Paris.

Soon she finds herself mixing with royalty and Rothschilds while battling her hysterical predecessor, Lady Leone, who refuses to leave the premises. When Fanny’s tender-hearted secretary begins filling the embassy with rescued animals and her teenage sons run away from Eton and show up with a rock star in tow, things get entirely out of hand. Gleefully sending up the antics of mid-century high society, Don’t Tell Alfred is classic Mitford.
Nancy Mitford, daughter of Lord and Lady Redesdale and the eldest of the six legendary Mitford sisters, was born in 1904 and educated at home on the family estate in Oxfordshire. She made her debut in London and soon became one of the bright young things of the 1920s, a close friend of Henry Green, Evelyn Waugh, John Betjeman, and their circle. A beauty and a wit, she began writing for magazines and writing novels while she was still in her twenties. In all, she wrote eight novels as well as biographies of Madame de Pompadour, Voltaire, Louis XIV, and Frederick the Great. She died in 1973. More information can be found at www.nancymitford.com.
“A wickedly clever novel in Nancy Mitford’s best vein, hilariously funny in conception and execution.” —Chicago Tribune

“Witty, high-spirited, entertaining, perceptive, and both a little cozy and a little cruel.” —The New York Times