The Deeper Meaning of Liff: A Dictionary of Things There Aren't Any Words for Yet--But There Ought to Be (Paperback) 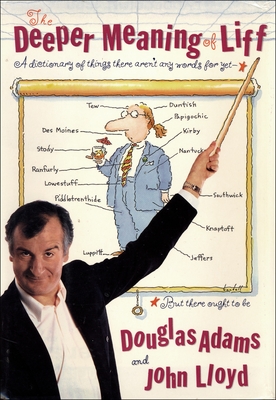 A rollicking, thought-provoking dictionary for the modern age, featuring definitions for those things we don't have words for, from the New York Times bestselling author behind The Hitchhiker's Guide to the Galaxy, Douglas Adams, and TV producer John Lloyd.

Does the sensation of Tingrith(1) make you yelp? Do you bend sympathetically when you see someone Ahenny(2)? Can you deal with a Naugatuck(3) without causing a Toronto(4)? Will you suffer from Kettering(5) this summer?

Probably. You are almost certainly familiar with all these experiences but just didn’t know that there are words for them. Well, in fact, there aren’t—or rather there weren’t, until Douglas Adams and John Lloyd decided to plug these egregious linguistic lacunae(6). They quickly realized that just as there are an awful lot of experiences that no one has a name for, so there are an awful lot of names for places you will never need to go to. What a waste. As responsible citizens of a small and crowded world, we must all learn the virtues of recycling(7) and put old, worn-out but still serviceable names to exciting, vibrant, new uses. This is the book that does that for you: The Deeper Meaning of Liff—a whole new solution to the problem of Great Wakering(8)

1—The feeling of aluminum foil against your fillings.

2—The way people stand when examining other people’s bookshelves.

3—A plastic packet containing shampoo, mustard, etc., which is impossible to open except by biting off
the corners.

4—Generic term for anything that comes out in a gush, despite all your efforts to let it out carefully, e.g., flour into a white sauce, ketchup onto fish, a dog into the yard, and another naughty meaning that we can’t put on the cover.

5—The marks left on your bottom and thighs after you’ve been sitting sunbathing in a wicker chair.

6—God knows what this means

7—For instance, some of this book was first published in Britain twenty-six years ago.

8—Look it up yourself.

Douglas Adams was the bestselling author of many works including The Hitchhiker’s Guide to the Galaxy, which was turned into a major motion picture. He died in 2001.

John Lloyd is (he says) Britain’s most successful television comedy producer since Chaucer and is responsible for Not the Nine O’Clock News, Spitting Image, and Blackadder, among others.