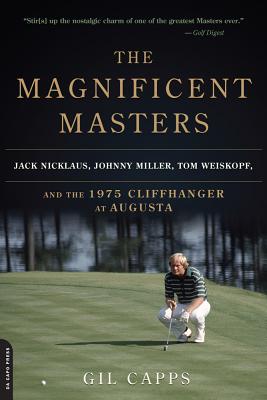 
Availability to be confirmed
The 1975 Masters Tournament always seemed destined for the record books. A veritable Hall of Fame list of competitors had gathered that spring in Augusta, Georgia, for the game's most famous event, including Arnold Palmer, Tom Watson, Gary Player, Lee Trevino, Hale Irwin, Billy Casper, and Sam Snead. The lead-up had been dominated by Lee Elder, the first black golfer ever invited to the exclusive club's tourney. But by the weekend, the tournament turned into a showdown between the three heavyweights of the time: Jack Nicklaus, Johnny Miller, and Tom Weiskopf. Never before had golf's top three players of the moment summoned the best golf of their lives in the same major championship. Their back-and-forth battle would rivet the sporting world and dramatically culminate in one of the greatest finishes in golf history.

In The Magnificent Masters, Gil Capps, a twenty-two-year veteran of the golf industry with NBC Sports and Golf Channel, recaptures hole-by-hole the thrilling drama of this singular event during golf's golden era, from the media-crazed build-up and intertwined careers of the three combatants to the tournament's final dramatic putts that would change the game of golf forever.
Gil Capps is an Emmy Award-winning associate producer on NBC Sports golf telecasts and managing editor at Golf Channel. He's worked on-site at nearly 500 tournaments around the world and has led the creation of Golf Channel's Editorial Research Unit, which he oversees. A native of North Carolina, Capps resides with his family in Winter Park, Florida.

GilCapps.com
Praise for The Magnificent Masters

"Stirs up the nostalgic charm of one of the greatest Masters ever."—Golf Digest

“The argument can be made that golf has never had a more extraordinary day than Sunday at the 1975 Masters.…[Gil Capps] makes the reader feel as if he's been transported back in time to that remarkable April afternoon.”—John Feinstein, national sportswriter and bestselling author of A Good Walk Spoiled

"When so many of us who've come to be accepted as expert in matters concerning golf need answers and counsel, we call on Gil.... The Magnificent Masters is an absolute reflection of a man who not only has the deepest understanding of the significance of that stunning 1975 tournament, but the perspective to tell the story in a way that makes us all understand, too."—Jimmy Roberts, NBC Sports, host of Golf Channel's In Play with Jimmy Roberts, and author of Breaking the Slump

"In the world of details, Gil Capps is golf's strongest man, and those strengths make The Magnificent Masters as potent for the reader today as they were for the viewer in 1975."—Brandel Chamblee, Golf Channel analyst and former PGA Tour winner and Masters participant