Being and Neonness, Translation and content revised, augmented, and updated for this edition by Luis de Miranda (Hardcover) 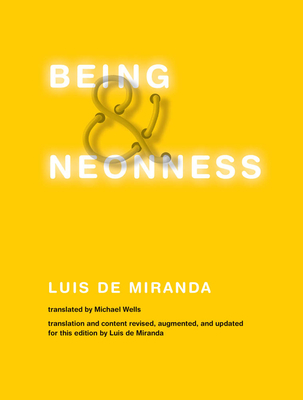 Being and Neonness, Translation and content revised, augmented, and updated for this edition by Luis de Miranda (Hardcover)


On Our Shelves Now
A cultural and philosophical history of neon, from Paris in the twentieth century to the perpetually switched-on present day.

For most of us, the word neon conjures images of lights, colors, nightlife, and streets. It evokes the poetry of city nights. For Luis de Miranda, neon is a subject of philosophical curiosity. Being and Neonness is a cultural and philosophical history of neon, from early twentieth-century Paris to the electric, perpetually switched-on present day Manhattan. It is an inspired journey through a century of night, deciphering the halos of the past and the reflections of the present to shed light on the future.

Invented in Paris in 1912, neon first appeared on a modest but arresting sign outside a small barbershop; the sign lit up number 14, Boulevard Montmartre, attracting so many passersby that the barber's revenues soon doubled. A century later, neon is no longer just a sign; it is a mythic object—a metonymy of contemporary identity and a metaphor for the present, signifying the ubiquity of commerce and the tautology of hypermodernity. But perhaps the noble gas of neon whispers something more, something deeper? In ten short, poetic yet precise chapters, de Miranda explores the neon lights of the twentieth century. He considers, among other historical curiosities, the neon compulsions of the Italian Futurists; the Soviet program of “neonization”; the Nazi's deployment of neon for propaganda purposes; Baudelaire's “halo” and Benjamin's “aura”; neon as a gas and crystallized chaos; neon and power; neon and capitalism—all of this backlit by an original reading of Sartre's Being and Nothingness. This English edition has been thoroughly revised and adapted from the French edition, L'être et le neon.

Luis de Miranda is a postdoctoral researcher in the Humanities Department at Örebro University and a philosophical counselor at the Philosophical Parlour in Sweden. He has published both nonfiction and fiction in France.
An inspired journey through a century of night, deciphering the halos of the past and the reflections of the present to shed light on the future.—Hyperallergic—

Being and Neonness is a slim, bright volume that demands a contemplative approach. The reader will be rewarded for taking time with this collection of essays.