Democracy and the Welfare State: The Two Wests in the Age of Austerity (Hardcover) 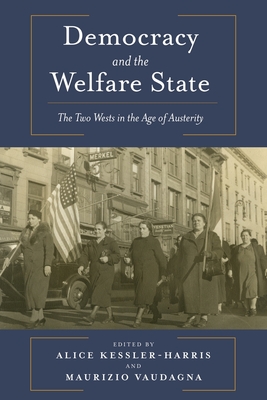 By Alice Kessler-Harris (Editor), Maurizio Vaudagna (Editor)
Questions about availability for this title? Ask us here!
Availability to be confirmed

After World War II, states on both sides of the Atlantic enacted comprehensive social benefits to protect working people and constrain capitalism. A widely shared consensus specifically linked social welfare to democratic citizenship, upholding greater equality as the glue that held nations together. Though the "two Wests," Europe and the United States, differ in crucial respects, they share a common history of social rights, democratic participation, and welfare capitalism. But in a new age of global inequality, welfare-state retrenchment, and economic austerity, can capitalism and democracy still coexist? In this book, leading historians and social scientists rethink the history of social democracy and the welfare state in the United States and Europe in light of the global transformations of the economic order. Separately and together, they ask how changes in the distribution of wealth reshape the meaning of citizenship in a post-welfare-state era. They explore how the harsh effects of austerity and inequality influence democratic participation. In individual essays as well as interviews with Ira Katznelson and Frances Fox Piven, contributors from both sides of the Atlantic explore the fortunes of the welfare state. They discuss distinct national and international settings, speaking to both local particularities and transnational and transatlantic exchanges. Covering a range of topics--the lives of migrant workers, gender and the family in the design of welfare policies, the fate of the European Union, and the prospects of social movements--Democracy and the Welfare State is essential reading on what remains of twentieth-century social democracy amid the onslaught of neoliberalism and right-wing populism and where this legacy may yet lead us.

Alice Kessler-Harris is R. Gordon Hoxie Professor of American History, emerita, and a professor in the Institute for Research on Women and Gender at Columbia University. Her books include Out to Work: A History of Wage-Earning Women in the United States (1982); In Pursuit of Equity: Women, Men, and the Quest for Economic Citizenship in Twentieth Century America (2001); A Woman's Wage (2014); and A Difficult Woman: The Challenging Life and Times of Lillian Hellman (2012). Maurizio Vaudagna is professor of contemporary history, emeritus, at the University of Eastern Piedmont. He is the author or editor of several books, including The American Century in Europe (2003) and The New Deal and the American Welfare State: Essays from a Transatlantic Perspective (2014). With Alice Kessler-Harris, he is the editor of Democracy and Social Rights in the "Two Wests" (2009).