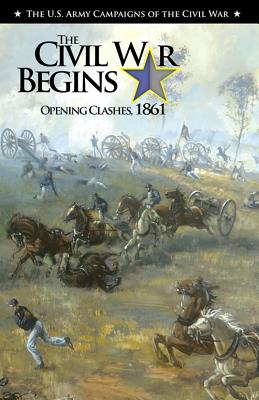 By Jennifer M. Murray, Center of Military History (U S Army) (Editor)
$4.00
Availability to be confirmed

NOTE: NO FURTHER DISCOUNT FOR THIS PRINT PRODUCT -OVERSTOCK SALE --Significantly reduced list price Although over one hundred fifty years have passed since the start of the American Civil War, that titanic conflict continues tomatter. The forces unleashed by that war were immensely destructive because of the significant issues involved: the existence of theUnion, the end of slavery, and the very future of the nation. The war remains our most contentious, and our bloodiest, with over

six hundred thousand killed in the course of the four-year struggle. Most civil wars do not spring up overnight, and the AmericanCivil War was no exception. The seeds of the conflict were sown in the earliest days of the republic's founding, primarily over theexistence of slavery and the slave trade. Although no conflict canbegin without the conscious decisions of those engaged in thedebates at that moment, in the end, there was simply no way topaper over the division of the country into two camps: one thatwas dominated by slavery and the other that sought first to limitits spread and then to abolish it. Our nation was indeed half slaveand half free, and that could not stand. Regardless of the factors tearing the nation asunder, thesoldiers on each side of the struggle went to war for personal

reasons: looking for adventure, being caught up in the passionsand emotions of their peers, believing in the Union, favoringstates rights, or even justifying the simple schoolyard dynamicof being convinced that they were worth three of the soldierson the other side. Nor can we overlook the factor that some wentto war to prove their manhood. This has been, and continuesto be, a key dynamic in understanding combat and the profession of arms. Soldiers join for many reasons but often stay in thefight because of their comrades and because they do not want toseem like cowards.

Whatever the reasons, the struggle was long and costly andonly culminated with the conquest of the rebellious Confederacy, the preservation of the Union, and the end of slavery. These

campaign pamphlets on the American Civil War, prepared incommemoration of our national sacrifices, seek to rememberthat war and honor those in the United States Army who died to

preserve the Union and free the slaves as well as to tell the story ofthose American soldiers who fought for the Confederacy despitethe inherently flawed nature of their cause. The Civil War was our

greatest struggle and continues to deserve our deep study andcontemplation. If you are a military historian, political scientist, or highschool and above student studying the American Civil War, you will want to have this book available for your research. Other related products:

Other products produced by the U.S. Army, Center of Military History (CMH) can be found here: https: //bookstore.gpo.gov/agency/1061