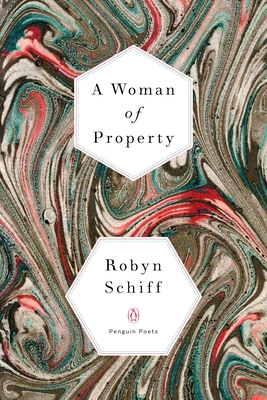 A new book from a poet whose work is "wild with imagination, unafraid, ambitious, inventive" (Jorie Graham)

Located in a menacing, gothic landscape, the poems that comprise A Woman of Property draw formal and imaginative boundaries against boundless mortal threat, but as all borders are vulnerable, this ominous collection ultimately stages an urgent and deeply imperiled boundary dispute where haunting, illusion, the presence of the past, and disembodied voices only further unsettle questions of material and spiritual possession. This is a theatrical book of dilapidated houses and overgrown gardens, of passageways and thresholds, edges, prosceniums, unearthings, and root systems. The unstable property lines here rove from heaven to hell, troubling proportion and upsetting propriety in the name of unfathomable propagation. Are all the gates in this book folly? Are the walls too easily scaled to hold anything back or impose self-confinement? What won't a poem do to get to the other side?
Robyn Schiff is the author of Revolver and Worth (both published by the University of Iowa Press), and the chapbook Novel Influenza (The Catenary Press). Schiff's poems have appeared in The New Yorker, The New Republic, Boston Review, Poetry, and elsewhere. Schiff is a co-editor at Canarium Books and she teaches poetry at the University of Iowa.
Praise for Robyn Schiff and A Woman of Property

“A study of the imagination’s darker powers and their daily, domestic insurrections. . .Schiff’s poems, with their Hitchcock-like distrust of appearances, their alertness to hidden binds and snares, offer something few poets ever discover:  a vision of the whole world. . . these poems are interested in everything, possessing a capaciousness that, paradoxically, requires tight control.”
–Dan Chiasson, The New Yorker

“Schiff’s is a major species of weird, glowing genius. She finds cosmic flow in the most awkward corners and masterminds whole new dimensions in the realms of wit, worry, and ‘what if?’ I don’t know what kind of magic allows this poet to take apart the entire world . . . and reassemble it with more pleasure, depth, loveliness, deadpan wordsmithery and good hard intelligence than it ever had before. I see everything differently now that I’ve experienced this world.  Nobody writes like Robyn Schiff: her brilliance is singular, her vision compound. We’ll be measuring this work’s radiance in light-years.”
–Brenda Shaughnessy

“This brilliant revelation of having and being had winds like a spiral staircase down from the nursery, into the garden, through violence and lust and contagion, to the Greek tragedy that is the foundation on which our American tragedy is built. ‘Every time I descend the stairs,’ Schiff writes, ‘I trespass what I already own.’”
–Eula Biss, author of On Immunity: An Inoculation

“Few collections this year are likely to match the subtle intelligence in this third outing from Schiff, whose syllabic stanzas, intricate syntax, and polymathic repertoire owes more than a bit to Marianne Moore. . .her sharpest lines yet.” '
–Publishers Weekly (starred review)