The Civil War in 50 Objects (Paperback) 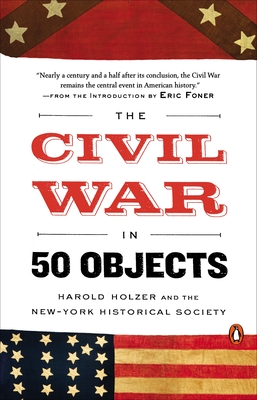 The Civil War in 50 Objects (Paperback)


Availability to be confirmed
The American companion to A History of the World in 100 Objects, a fresh, visual perspective on the Civil War

From a soldier’s diary with the pencil still attached to John Brown’s pike, the Emancipation Proclamation, and the leaves from Abraham Lincoln’s bier, here is a unique and surprisingly intimate look at the Civil War.

Lincoln scholar Harold Holzer sheds new light on the war by examining fifty objects from the New-York Historical Society’s acclaimed collection. A daguerreotype of an elderly, dignified ex-slave; a soldier’s footlocker still packed with its contents; Grant’s handwritten terms of surrender at Appomattox—the stories these objects tell are rich, poignant, sometimes painful, and always fascinating. They illuminate the conflict from all perspectives—Union and Confederate, military and civilian, black and white, male and female—and give readers a deeply human sense of the war.
Harold Holzer has written or edited more than forty books on Lincoln and the Civil War era. He is currently a senior vice president at The Metropolitan Museum of Art and a Roger Hertog Fellow at the New-York Historical Society. He lives in New York City.

The New-York Historical Society is the oldest museum in New York City, and one of the country’s pre-eminent cultural institutions.
“In his new book, The Civil War in 50 Objects, Harold Holzer uses pictures of a fascinating menagerie of Civil War-related items to distill what historian Eric Foner calls in his introduction a conflict that ‘permanently affected the future course of the development of the United States. Holzer handles the task with ease, showcasing the era through such artifacts as a pair of slave’s shackles sized for the wrists of a child and a copy, signed by Abraham Lincoln, of the manuscript for the 13th Amendment..”—The Washington Post

“Packaged in an unusually high-quality edition, this book is the next best thing to viewing the artifacts in person or, given Holzer’s thorough explanation of the history of each object, it might be even better.”—The Seattle Times

“Holzer's essays educate and entertain, folding in noteworthy asides….  Holzer pieces [the objects] together to create a compelling story of the people who lived during the bloodiest war in American history — a war that jumped the boundaries of the battlefield to spark a race riot on July 10, 1863.”—The Chicago Tribune

“The Civil War in 50 Objects is a collection of deeply researched essays by the Lincoln scholar Harold Holzer.  Mr. Holzer examines war-era artifacts culled from the collection at the New-York Historical Society, where he is a Roger Hertog Fellow, to get at a deeper truth about the single most defining event in American history.”—New York Observer

“Holzer, working through the archives of the New-York Historical Society, unearths treasures, if sometimes grim ones.  Holzer’s choice of objects is spot-on, and the anecdotes they occasion are even more so, particularly when he turns to little-commemorated episodes such as the valiant charge of 14 New York dragoons against a much larger Confederate force (it did not end well for the dragoons) and the effect of the Union blockade on school primers in the South.  A valuable addition to the popular literature of the Civil War, well-conceived and packaged.”—Kirkus