The Faraway Nearby (Paperback) 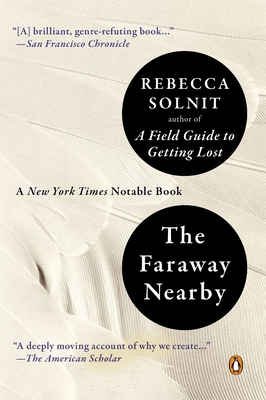 The Faraway Nearby (Paperback)


Availability to be confirmed
A New York Times Notable Book

A personal, lyrical narrative about storytelling and empathy, from the author of Orwell's Roses

Apricots. Her mother's disintegrating memory. An invitation to Iceland. Illness. These are Rebecca Solnit's raw materials, but The Faraway Nearby goes beyond her own life, as she spirals out into the stories she heard and read—from fairy tales to Mary Shelley's Frankenstein—that helped her navigate her difficult passge. Solnit takes us into the lives of others—an arctic cannibal, the young Che Guevara among the leprosy afflicted, a blues musician, an Icelandic artist and her labyrinth—to understand warmth and coldness, kindness and imagination, decay and transformation, making art and making self. This captivating, exquisitely written exploration of the forces that connect us and the way we tell our stories is a tour de force of association, a marvelous Russian doll of a book that is a fitting companion to Solnit's much-loved A Field Guide to Getting Lost.
Writer, historian, and activist Rebecca Solnit is the author of seventeen books about environment, landscape, community, art, politics, hope, and feminism, including three atlases, of San Francisco in 2010, New Orleans in 2013, and New York in 2016; Men Explain Things to Me; The Faraway Nearby; A Field Guide to Getting Lost; Wanderlust: A History of Walking; and River of Shadows: Eadweard Muybridge and the Technological Wild West (for which she received a Guggenheim, The National Book Critics Circle Award in Criticism, and the Lannan Literary Award). She is a columnist at Harper's and a regular contributor to The Guardian. She lives in San Francisco.
Praise for The Faraway Nearby:

"In her famously lyrical prose, Solnit writes about her own life, her family, and her reading, and she revisits the myths and ideas from art and history that have shaped her world."
—The New Yorker

"What Solnit offers us, I think, is the future of memoir. Not the story of the self . . . but the ways in which one's story opens into other stories . . . literary nonfiction doesn't get more beautiful and compelling."
—The American Scholar

"A beautiful and profound book of essayistic reflection on memory, family, grief, travel, and storytelling."
—The Millions

"The product of a remarkable mind at work, one able to weave a magnificent number of threads into a single story, demonstrating how all our stroies are interconnected."
—Bookforum

"[A] brilliant, genre-refuting book. The power of The Faraway Nearby, as in Solnit's previous writing, lies in its juxtaposition, its clusters of narrative nerves. . . . Solnit is a wanderer who collapses distance."
—San Francisco Chronicle