Golf in the Kingdom (Paperback) 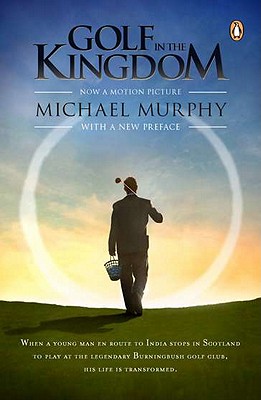 Golf in the Kingdom (Paperback)


Availability to be confirmed
Since its first publication, Golf in the Kingdom has been recognized as a classic work on the deeper mysteries of golfa gospel of those who suspect, or know, that golf is more than a mere pastime.A young man en route to India stops in Scotland to play at the legendary Burningbush golf club and in twenty-four hours, his life is transformed. Paired with a mysterious teacher named Shivas Irons, he is led through a round of phenomenal golf, swept into a world where extraordinary powers are unleashed in a a backswing governed by true gravity. A night of adventure and revelation follow, and lead to a glimpse of Seamus MacDuff, the holy man who haunts a ravine off Burningbush's thirteenth fairwayone they call Lucifer's Rug.Murphy's account reveals the possibilities for transcendence that resides in the human soul, and through mystic-philosopher Shivas Irons, the reader, like Murphy, becomes drawn into new worlds by this ancient and haunting game.
Michael Murphy began his quest into the nature of human potential in the late 1950s while a psychology major at Stanford University. After a year of graduate school, he spent 18 months in India, at the ashram of Sri Aurobindo in Pondicherry. Aurobindo started him thinking about the relationship between the evolution of consciousness and the physical body.In 1961, shortly after his return to the United States, Murphy met Richard Price, another Standford Psychology major, and in 1962 they founded the Esalen Institute in Big Sur, California. The Esalen Institute, the leading growth center in the world, has hosted thousands of human potential workshops and conferences led by such notables as Abraham Maslow, Joseph Campbell, Rollo May, Fritz Perls, Aldous Huxley, Carl Rogers, Ida Rolf, Joan Halifax, Stanislov Grof, Joan Borysenko, Allen Ginsberg, and Linus Pauling, to name a few.In 1980, he helped create the Esalen Institute s Soviet American Exchange program which, among other things, initiated the first live television space bridges and hosted Boris Yeltsin during his first visit to the United States.Michael Murphy is the author of The Future of the Body, Gold in the Kingdom (released by Penguin Books/Arkana), Jacob Atabet, and End to Ordinary History, and co-author of The Psychic Side of Sports. He lives in San Rafael, California."