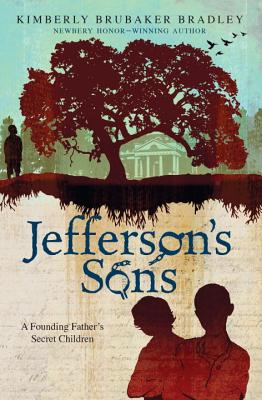 “This engaging middle grade book imagines the lives of Thomas Jefferson's children by his slave Sally Hemings. Although they occupied a position of privilege in the slave hierarchy at Monticello, Bradley makes it clear that they were still subject to sub-human treatment. As the children grew up, they confronted their mother with difficult questions, and she devised a plan for them to live in freedom.”
— Deborah Johnson, Barstons Child's Play, Washington, DC

This story of Thomas Jefferson's children by one of his slaves, Sally Hemings, tells a darker piece of America's history from an often unseen perspective-that of three of Jefferson's slaves-including two of his own children. As each child grows up and tells his story, the contradiction between slavery and freedom becomes starker, calliing into question the real meaning of "life, liberty, and the pursuit of happiness." This poignant story sheds light on what life was like as one of Jefferson's invisible offspring.
Kimberly Brubaker Bradleylives on a forty-two-acre farm inBristol, Tennessee.
* “A big, serious work of historical investigation and imagination; the tale has never before been told this well.” — Kirkus, starred review

* “[an] eye-opening and powerful novel.” — The Horn Book, starred review

* “Bradley’s sensitive and richly imagined vision pays respect to those who struggled for lives of stability and dignity, even as the whims and fortunes of the Jeffersons shifted beneath them.” — Bulletin of the Center for Childrens Books, starred review

“This well-researched and moving novel provides insight into their lives as it raises important and difficult questions.” — American Library Association

“The young innocents’ elemental questions raise fundamental issues for the reader. How could founding father Jefferson sell off Maddy’s best friend? What does it mean, ‘all people are created equal?’” — Booklist