One Last Thing Before I Go: A Novel (Paperback) 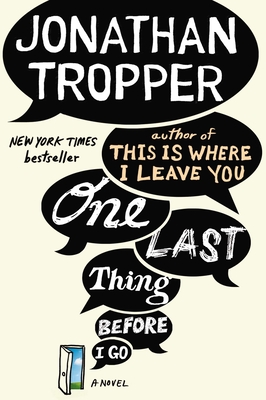 One Last Thing Before I Go: A Novel (Paperback)


Special Order - Usually Arrives in 1-5 Days
The bestselling author of This Is Where I Leave You returns with a hilarious and heart-rending tale about one familiy's struggle to reconnect.

“Mistakes have been made.” Drew Silver has begun to accept that life isn’t going to turn out as he expected. His fleeting fame as the drummer for a one-hit wonder rock band is nearly a decade behind him. His ex-wife is about to marry a terrific guy. And his Princeton-bound teenage daughter Casey has just confided in him that she’s pregnant—because Silver is the one she cares least about letting down.

So when Silver learns that he requires emergency life-saving heart surgery, he makes the radical decision to refuse the operation, choosing instead to spend what time he has left to repair his relationship with Casey, become a better man, and live in the moment—even if that moment isn’t going to last very long. As his exasperated family looks on, Silver grapples with the ultimate question of whether or not his own life is worth saving.

Jonathan Tropper is the New York Times bestselling author of five previous novels; Plan B, The Book of Joe, Everything Changes, How To Talk to a Widower, and This Is Where I Leave You. His books have been translated into over twenty languages. He is also a screenwriter, and the co-creator and executive producer of the HBO/Cinemax television show Banshee (produced by Alan Ball), premiering in 2013.
"Tropper’s characters are likably zany and fallible, and perhaps more important, funny. One Last Thing Before I Go is a poignant story about facing death and celebrating life, even when things seem well beyond repair." --Newsweek/The Daily Beast on One Last Thing Before I Go

"The richly talented Tropper (This Is Where I Leave You) has created an acerbic, middle-aged lost soul who will ultimately illuminate the reasons we stick around on this lopsided planet despite significant temptation to let it go. Readers will love Silver and want to throttle him in equal measure. Eminently quotable, hilariously funny, and emotionally draining, this arresting tour de force will entertain well after the book is done."  -Library Journal (starred review) on One Last Thing Before I Go

“…a bristling, witty tale of woe that'll make you appreciate whatever good things, no matter how few, have come your way.” –Entertainment Weekly on One Last Thing Before I Go