The Island of Dr Moreau (Paperback) 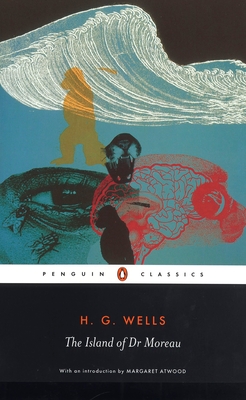 The Island of Dr Moreau (Paperback)


On Our Shelves Now
Adrift in a dinghy, Edward Prendick, the single survivor from the good ship Lady Vain, is rescued by a vessel carrying an unusual cargo—a menagerie of savage animals. Nursed to recovery by their keeper Montgomery, who gives him dark medicine that tastes of blood, Prendick soon finds himself stranded upon an uncharted island in the Pacific with his rescuer and the beasts. There, he meets the sinister Dr. Moreau—a brilliant scientist whose notorious experiments in vivisection have caused him to abandon the civilized world. It soon becomes clear that he has continued to develop these experiments with truly horrific results.

The edition includes a newly established text, a full biographical essay on Wells, a list of further reading, and detailed note. Margaret Atwood’s introduction explores the social and scientific relevance of this influential work.

For more than seventy years, Penguin has been the leading publisher of classic literature in the English-speaking world. With more than 1,700 titles, Penguin Classics represents a global bookshelf of the best works throughout history and across genres and disciplines. Readers trust the series to provide authoritative texts enhanced by introductions and notes by distinguished scholars and contemporary authors, as well as up-to-date translations by award-winning translators.
H.G. Wells was a professional writer and journalist, who published more than a hundred books, including novels, histories, essays and programmes for world regeneration. Wells's prophetic imagination was first displayed in pioneering works of science fiction, but later he became an apostle of socialism, science and progress. His controversial views on sexual equality and the shape of a truly developed nation remain directly relevant to our world today. He was, in Bertrand Russell's words, 'an important liberator of thought and action'.

Margaret Atwood is the award-winning and bestselling author of more than thirty-five volumes of poetry, fiction, and nonfiction.