The Hound of the Baskervilles (Penguin Clothbound Classics) (Hardcover) 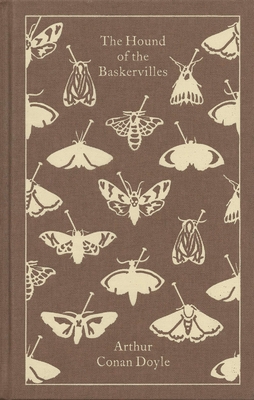 The Hound of the Baskervilles (Penguin Clothbound Classics) (Hardcover)


Backordered
Part of Penguin's beautiful hardback Clothbound Classics series, designed by the award-winning Coralie Bickford-Smith, these delectable and collectible editions are bound in high-quality colourful, tactile cloth with foil stamped into the design. The terrible spectacle of the beast, the fog of the moor, the discovery of a body, this classic horror story pits detective against dog. When Sir Charles Baskerville is found dead on the wild Devon moorland with the footprints of a giant hound nearby, the blame is placed on a family curse. It is left to Sherlock Holmes and Doctor Watson to solve the mystery of the legend of the phantom hound before Sir Charles' heir comes to an equally gruesome end.
Sir Arthur Conan Doyle was born in Edinburgh in 1859 and died in 1930. Within those years was crowded a variety of activity and creative work that made him an international figure and inspired the French to give him the epithet 'the good giant'. He was the nephew of 'Dickie Doyle' the artist, and was educated at Stonyhurst, and later studied medicine at Edinburgh University, where the methods of diagnosis of one of the professors provided the idea for the methods of deduction used by Sherlock Holmes.
“The whole Sherlock Holmes saga is a triumphant illustration of art’s supremacy over life.” —Christopher Morley