Knocking Myself Up: A Memoir of My (In)Fertility (Hardcover) 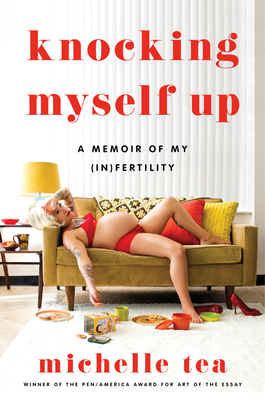 Knocking Myself Up: A Memoir of My (In)Fertility (Hardcover)

From PEN/America Award winner, 2021 Guggenheim fellow, and beloved literary and tarot icon Michelle Tea, the hilarious, powerfully written, taboo-breaking story of her journey to pregnancy and motherhood as a 40 year-old, queer, uninsured woman

Written in intimate, gleefully TMI prose, Knocking Myself Up is the irreverent account of Tea’s route to parenthood—with a group of ride-or-die friends, a generous drag queen, and a whole lot of can-do pluck. Along the way she falls in love with a wholesome genderqueer a decade her junior, attempts biohacking herself a baby with black market fertility meds (and magicking herself an offspring with witch-enchanted honey), learns her eggs are busted, and enters the Fertility Industrial Complex in order to carry her younger lover’s baby.

With the signature sharp wit and wild heart that have made her a favorite to so many readers, Tea guides us through the maze of medical procedures, frustrations and astonishments on the path to getting pregnant, wryly critiquing some of the systems that facilitate that choice (“a great, punk, daredevil thing to do”). In Knocking Myself Up, Tea has crafted a deeply entertaining and profound memoir, a testament to the power of love and family-making, however complex our lives may be, to transform and enrich us.

Michelle Tea is the author of over a dozen books, including the cult-classic Valencia, the illustrated Rent Girl, and the speculative memoir Black Wave. She is the recipient of awards from the Guggenheim, Lambda Literary, and Rona Jaffe Foundations, PEN/America, and other institutions. Knocking Myself Up is her latest memoir.

Tea's cultural interventions include brainstorming the international phenomenon Drag Queen Story Hour, co-creating the Sister Spit queer literary performance tours, and occupying the role of Founding Director at RADAR Productions, a Bay Area literary organization, for over a decade. She also helmed the imprints Sister Spit Books at City Lights Publishers, and Amethyst Editions at The Feminist Press. She produces and hosts the Your Magic podcast, wherein which she reads tarot cards for Roxane Gay, Alexander Chee, Phoebe Bridgers and other artists, as well as the live tarot show Ask the Tarot on Spotify Greenroom.