The Movement Made Us: A Father, a Son, and the Legacy of a Freedom Ride (Hardcover) 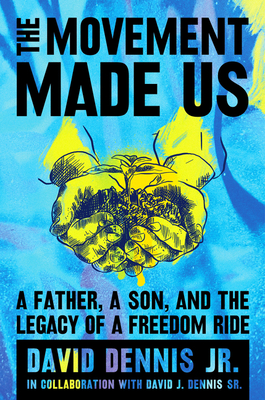 The Movement Made Us: A Father, a Son, and the Legacy of a Freedom Ride (Hardcover)

“A story of triumph and resilience centered around those who dedicated their lives to the Civil Rights movement. It reminds us that, in order to truly appreciate how far we’ve come—and how far we still have to go—we must acknowledge the past and pay homage to those who laid the foundation. It reminds us that everyday people can be heroes if they stand up for what’s right. It reminds us that we’re not alone in our experiences, and that if we work together, we can make impactful change.”—Stephen Curry

“The Movement Made Us takes literature to a momentous Southern Black space to which I honestly never thought a book could take us. This is literally the Movement that made us and both Davids love us whole here with a creation that is as ingenious as it is soulfully sincere. Stunning.”—Kiese Laymon, author of Heavy

A dynamic family exchange that pivots between the voices of a father and son, The Movement Made Us is a unique work of oral history and memoir, chronicling the extraordinary story of the Civil Rights Movement of the 1960s and its living legacy embodied in Black Lives Matter. David Dennis Sr, a core architect of the movement, speaks out for the first time, swapping recollections both harrowing and joyful with David Jr, a journalist working on the front lines of change today.

Taken together, their stories paint a critical portrait of America, casting one nation’s image through the lens of two individual Black men and their unique relationship. Playful and searching, anxious and restorative, fearless and driving, this intimate memoir features scenes from across David Sr’s life, as he becomes involved in the movement, tries to move beyond it, and ultimately returns to it to find final solace and new sense of self—revealing a survivor who travels eternally with a cabal of ghosts.

A crucial addition to Civil Rights history, The Movement Made Us is the story of a nation reckoning with change and the hopes, struggles, setbacks, and triumphs of modern Black life. This is it: the extant chronicle of why we live, why we move, and for what we are made.

DAVID J. DENNIS JR. is a senior writer at ESPN's Landscape. His work has been featured in Atlanta magazine, The Atlantic, the Washington Post, and the New York Times, among other publications. Dennis is the recipient of the 2021 American Mosaic Journalism Prize, is a National Association of Black Journalist Salute to Excellence award winner, and was named one of The Root’s 100 Most Influential African Americans of 2020. He lives in Georgia with his wife and two children and is a graduate of Davidson College.

DAVID J. DENNIS SR. is a civil rights veteran and one of the original Freedom Riders who rode from Montgomery to Jackson in 1961. He served as field secretary for the Congress of Racial Equality in Louisiana and Mississippi (1961–65) and as co-director with Bob Moses of the Voter Education Committee of the Council of Federated Organizations. He helped organize the Mississippi Freedom Summer, the Mississippi Freedom Democratic Party, and the challenge to the National Democratic Party in 1964. He attended Dillard University and earned his law degree at the University of Michigan. In 1972, he co-directed the challenge to the Louisiana Democratic structure that resulted in an African American chairman and a majority African American delegation being sent to the national convention, the first time since Reconstruction. He is the executive director of the Southern Initiative Algebra Project, Inc., a nonprofit organization that works to ensure a quality education for all children, especially children of color and the chronically underserved.

"An incredible insight into not only how these activists planned and strategized around police lies, but it also revealed the daily trauma they endured due to the police officers." — Forbes

"The heavy toll exacted by the fight against Jim Crow is tallied in this gripping memoir. . . . A remarkably intimate and vivid portrait of the human side of the civil rights movement." — Publishers Weekly

"Timely in an era of renewed disenfranchisement and an instructive, important addition to the literature of civil rights." — Kirkus Reviews (starred review)

"Moving, evocative, and haunting, this father-son perspective on the civil rights movement is a necessary read and a great addition for all library collections." — Library Journal (starred review)

“One of the most important books about the civil rights movement I have ever read. In interviewing his father, who was on the front lines of the Black freedom struggle—and who was close friends with so many of its most recognized names—you get as intimate a view of the movement as you will ever encounter. It’s a brilliant behind the scenes account of one of our country’s most important eras. It strips the civil rights movement of caricature and treats those who were a part of it as the three-dimensional people they were. This book is special.” — Clint Smith, author of How the Word Is Passed: A Reckoning with the History of Slavery Across America

"Captivating from the opening sentence, David J. Dennis, Jr., proves that he is not only a great writer, but he is also a great witness. In The Movement Made Us, Dennis, through a thoughtful and unsparing recalibration of history, captures all of the terrors of being Black in the United States, the diligence of our resistance work, the nuances of our existence, and the miracle of our survival. These are integral testimonies, these vivid, harrowing, and moving remembrances passed from ancestor to elder to son. The Movement Made Us is a stunning chronicle of defiance." — Robert Jones, Jr., author of The Prophets

"A memoir in two voices, crossing generations, and binding them together: The Movement Made Us is beautiful, searing, tender, brilliant. It offers a wholly new way of thinking about the inheritances we are born into and must grow and live with: familial, historic, traumatic, and triumphant inheritances. If you have any interest in the history of the Civil Rights Movement, the struggle for racial justice, and African American life, this book is for you. And even if you think you know the history of the movement, this book will astonish you in moving and transformative ways." — Imani Perry, author of Breathe and South to America

“The Movement Made Us hit me hard, deep in my gut . . . David Dennis, Sr. has always been a hero of mine, but I never knew his story; I only knew the intensity of his eyes, the quiver in his voice as he eulogized James Chaney. Now his son has brought the painful details of his life—of their life—to the page. This is a story of courage, sacrifice, loss, survivor’s guilt, and redemption. But, most importantly, it is a story of love . . . of us and of that between a son and his father.” — Eddie S. Glaude Jr., author of Begin Again: James Baldwin’s America and Its Urgent Lessons for Our Own

“In this searing memoir of the civil rights movement, a father and son reckon with the costs exacted in that struggle—to the nation, to the movement, and most of all, to themselves and their relationship. The Movement Made Us is a must-read work for anyone seeking to understand the past and present of the fight for racial equality.” — Kevin M. Kruse, professor of History, Princeton University

"I learned a lot from this deep and lively memoir of the struggle to improve America. It is especially striking for its quick, graceful portraits of key figures such as Medgar Evers, Fannie Lou Hamer, and James Baldwin." — Thomas E. Ricks, author of Fiasco and Waging a Good War: A Military History of the Civil Rights Movement, 1954-1968

“The Dennises’ remarkable, beautifully written oral history and memoir sparks a long overdue reckoning. It is the most raw, intimate accounting and recounting of the civil rights era I’ve ever read. What was sacrificed? What was lost? What does trauma do to a body, a family? The Movement Made Us takes us to the intersections of history, memory, activism, and parenthood, where tenderness lives alongside the terror and violence of America’s broken promises—yesterday’s and today’s. Here, we travel the emotional distance between a son’s searching and a father’s regrets to arrive ultimately, hopefully, to a healing place.” — Deesha Philyaw, author of The Secret Lives of Church Ladies

"The Movement Made Us takes literature to a momentous Southern Black space I honestly never thought a book could take us. This is literally the movement that made us and both Davids love us whole here with a creation that is as ingenious as it is soulfully sincere. Stunning." — Kiese Laymon, author of Heavy