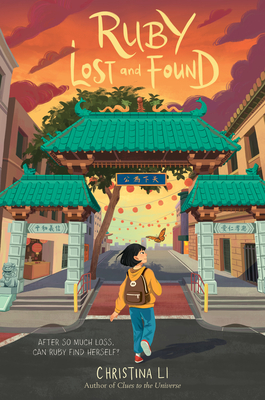 Perfect for fans of Kelly Yang and Rebecca Stead, this touching middle grade novel maps one girl’s quest to remember her grandfather through his scavenger hunts; reconnect with her family; and fight for her community in her rapidly changing hometown.

Thanks to her Ye-Ye’s epic scavenger hunts, thirteen-year-old Ruby Chu knows San Francisco like the back of her hand. But after his death, she feels lost, and it seems like everyone—from her best friends to her older sister—is abandoning her.

After Ruby gets in major trouble at school, her parents decide she has to spend the summer at a local senior center, with her grandmother, Nai-Nai, and Nai-Nai’s friends for company. When a new boy from Ruby’s grade, Liam Yeung, starts showing up too, Ruby’s humiliation is complete.

But Nai-Nai, her friends, and Liam all surprise Ruby. She finds herself working with Liam, who might not be as annoying as he seems, to help save a historic Chinatown bakery that’s being priced out of the neighborhood. And alongside Nai-Nai, who is keeping a secret that threatens to change everything, Ruby retraces Ye-Ye’s scavenger hunt maps in an attempt to find a way out of her grief—and maybe even find herself.

Christina Li is the author of Clues to the Universe and Ruby Lost and Found. At any given time she is probably daydreaming about characters and drinking too much jasmine green tea. She grew up in the Midwest and California but now calls New York home. Find her online at www.christinaliwrites.com.