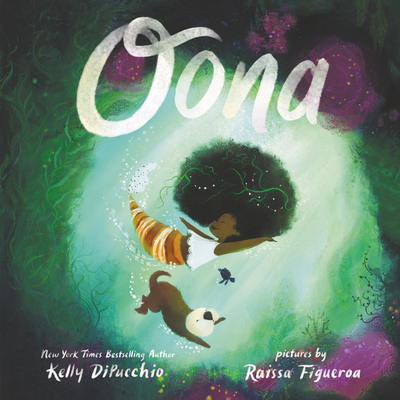 This is book number 1 in the Oona series.

“I am in love with this book: the characters, the storytelling, the art, the message — everything. Oona the mermaid and her best friend, Otto the otter, live in a dreamy ocean world filled with adventure and laughter. Oona has a passion for finding, collecting, and creating, which leads to some serious trouble but also some great problem-solving. It’s impossible to finish this book without feeling like you have two new friends — and perhaps a sudden desire to make something fantastic of your own?”
— Brittany Baker, Trident Booksellers & Cafe, Boston, MA

Oona is a mermaid, and her best friend is an otter. Together they explore the challenging and murky ocean depths, so beautifully illustrated by Raissa Figueroa, to search for treasure. Even when things get tough, the pair find that by working together and continuing to try, they can find success. Take a trip to the sea with Oona.

This comical and heartfelt picture book is a winning celebration of invention, creativity, and friendship. With gorgeous underwater scenes and a crowd-pleasing tale, this is one little mermaid who is here to make a splash!

Oona and her best friend Otto love to search for treasure…and often find trouble instead.

That’s never stopped them before, though!

After all, no proper treasure hunt is without some adventure. But when the grandest treasure yet is stuck in a deep, dark rift, Oona’s not sure if she can dive right in. What might be waiting for her in those unknown waters?

Kelly DiPucchio is the New York Times bestselling author of many beloved books for children, including Grace for President, Dragon Was Terrible, and Oona, illustrated by Raissa Figueroa. As a little girl Kelly wanted a pet otter but settled for a pet goat instead. When she’s not writing, Kelly loves to search for treasure and mermaids in Michigan’s Great Lakes. Land friends can visit her online at www.kellydipucchio.com.

Raissa Figueroa loves walking the beaches in search of tiny treasures of her own. She lives and works in sunny San Diego, CA. She’s the illustrator for several children’s books, including Oona, written by Kelly DiPucchio. You can visit her at www.rizzyfig.com.

“This title celebrates independence, self-confidence, and bravery to try the new even after defeat as Oona becomes aware of the true treasure in her personal effort.” — School Library Journal (starred review)

"Oona is an adorable protagonist, with her dark skin, enormous Afro, and striped, orange tail. With her ups and downs and her fundamental ebullience, she will easily win fans... [T]he messages of persistence and of valuing the work of one’s own creation are strong and effective. A small heroine young readers will be happy to meet."  — Kirkus Reviews

"Oona is undeniably adorable, and her pal Otto is similarly charming. The playful humor is, like Oona herself, “sweet . . . and a little bit salty,” bringing together gentleness with just a dash of sass. Disney kids will recognize the book’s many nods to The Little Mermaid and appreciate its attempts to diversify the underwater world." — Bulletin of the Center for Children’s Books

Praise for Grace for President: "DiPucchio and Pham are game gals. Explaining the electoral system to adults isn’t easy, but they make it understandable to kids." — Booklist

"Delivers lessons on electoral votes, polls, and the reason every vote counts." — The New York Times

Praise for Dragon Was Terrible: "The text and illustrations work together to offer readers a different story—one that is modern and timeless… This is one terribly good dragon tale that will leave readers laughing and with an appreciation for the healing power of a good book."  — Kirkus Reviews (starred review)

"In naive, flattened cartoons, Pizzoli mixes modern and medieval with aplomb as Dragon TP’s a castle and spray paints “Dragon was here” on a wall underneath a posted notice from the king promising a reward to whomever stops Dragon. These pictures, combined with DiPucchio’s clearly disapproving narrator make Dragon’s transgressions all the funnier." — Publishers Weekly

Praise for Super Manny Stands Up: "This charming story marries the mania for superheroes with a potent anti-bullying message, making it an apt tale for present times." — Kirkus Reviews

“DiPucchio’s…brevity and directness should make an instant connection with readers. Graegin’s pencil-and-ink pictures seem unassuming and lighthearted…, but when the lunchroom scene unfolds, the images take on surprising and touching drama, creating a powerful moment of truth.” — Publishers Weekly

"VERDICT: This wonderful read-aloud is sure to be a crowd-pleaser." — School Library Journal

Praise for Everyone Loves Bacon: “Retro art meets wry humor in this very funny tale of hubris set in a diner. Throughout, Wight's expressive illustrations meet DiPucchio's text at every humorous turn as they define the foodstuffs-er, characters with cartoonish panache.  A bacon book so funny that perhaps even some vegetarians will love it.” — Kirkus Reviews (starred review)

“DiPucchio and Wight...tell a comically cautionary story that's worthy of Behind the Music. DiPucchio's short, direct text provides just the right setup for Wight's boisterous, spoofy drawings and egomaniacal star. His bright-eyed anthropomorphism and visual nudges should remind many readers of Veggie Tales at its most supremely silly.”  — Publishers Weekly