Just Feed Me: Simply Delicious Recipes from My Heart to Your Plate (Paperback) 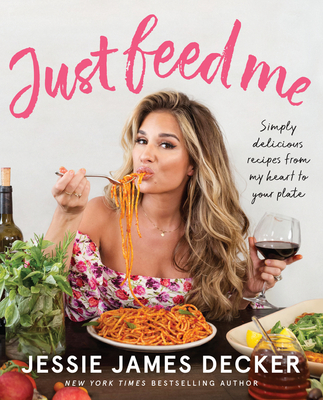 Just Feed Me: Simply Delicious Recipes from My Heart to Your Plate (Paperback)

In her New York Times bestselling book Just Jessie, Jessie James Decker invited fans into her life, sharing personal moments, honest recollections, and a window into life with her husband Eric Decker and their children. Along the way she also shared some of her favorite recipes from home, showcasing the mouthwatering food that has nourished and delighted her family, leaving readers hungry for more of her home-cooking secrets.

In this, her first cookbook, Jessie goes even further, opening her kitchen cabinets and inviting fans to sit for a spell and enjoy a great meal at the Decker dinner table. Just Feed Me gives fans what they want—simply delicious meals from the heart.  Jessie shares down-home and simple-to-make recipes for drinks, appetizers, and full dinners—many Italian, Southern and Cajun dishes which were handed down to her from her mom. She also offers advice and inspiration for creating the warm, appealing scents and savory feel of her own kitchen, the heart of her household.

Aspirational, beautiful, with fun, fast, and flavorful recipes, Just Feed Me is a family-friendly cookbook and keepsake that will leave Jessie fans asking for second helpings.