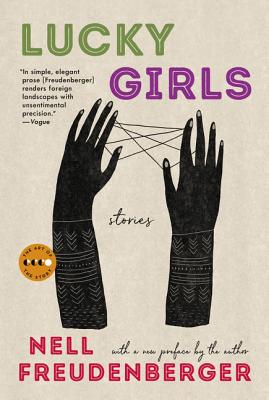 By Nell Freudenberger
$16.99
Availability to be confirmed

Lucky Girls is a collection of five novella-like stories, which take place mostly in Asia. The characters—expatriates, often by accident—are attracted to the places they find themselves in a romantic way, or repelled by a landscape where every object seems strange. For them, falling in love can be inseparable from the place where it happens.

Living according to unfamiliar rules, these characters are also vulnerable in unique ways. In the title story, a young woman who has been involved in a five-year affair with a married Indian man feels bound to both her memories and her adopted country after his death. The protagonist of “Outside the Eastern Gate” returns to her childhood home in Delhi, to find a house still inhabited by the impulsive, desperate spirit of her mother, who left her family for a wild journey over the Khyber Pass to Afghanistan. In “Letter from the Last Bastion,” a teenage girl begins a correspondence with a novelist who’s built his reputation writing about his experiences as a soldier in Vietnam and who, in his letters, confides in her a secret about his past.

Highly anticipated in the literary community and beyond, Lucky Girls marks the debut of a very special talent that places her among today’s most gifted young writers.

Nell Freudenberger is the author of the novels Lost and Wanted, The Newlyweds and The Dissident, and of the story collection Lucky Girls, which won the PEN/Malamud Award and the Sue Kaufman Prize for First Fiction from the American Academy of Arts and Letters. Named one of The New Yorker’s “20 under 40” in 2010, she is a recipient of a Guggenheim Fellowship, a Whiting Award, and a Cullman Fellowship from the New York Public Library. She lives in Brooklyn with her family.

“Throughout the book...are moments of sharp humor and wise insight.”
— Los Angeles Times

“Lucky Girls is a beautiful story that has a graceful simplicity.”
— People

“[Freudenberger’s] stories have the complex nuances of a mature writer.”
— Speakeasy magazine