Rise of the Vicious Princess (Hardcover) 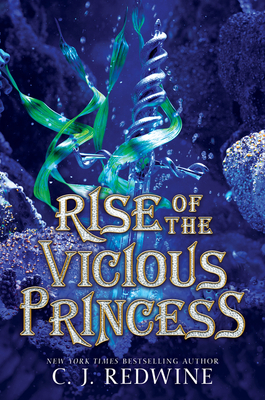 Rise of the Vicious Princess (Hardcover)

The first in a YA political fantasy duology about a fierce princess determined to bring lasting peace to her kingdom regardless of the cost to her heart—from C.J. Redwine, the author of the Defiance series and the New York Times bestselling Ravenspire series. Perfect for fans of These Violent Delights, And I Darken, and Ash Princess.

Princess Charis Willowthorn is the dutiful sword of Calera. Raised to be ruthless and cunning, her only goal is to hold her war-torn kingdom together long enough to find a path toward peace with their ancient foe Montevallo, even if the cost is her own heart.

When violence erupts in the castle itself, nearly killing the queen, Charis must assume her mother’s duties and manage both the war and her kingdom. But as an unseen enemy begins sinking Calera’s ships, Charis realizes a threat much greater than Montevallo is coming for her people. So she forms a plan.

By day, she is Calera’s formidable princess intent on forging an alliance with Montevallo. By night, she disguises herself as a smuggler and roams the sea with a trusted group of loyalists, hunting for their new enemies. And through it all, there's the one boy she can't have—who guards her life, but steals her heart.

But her enemies are much closer than Charis realizes, and her heart isn’t the only thing she has left to lose.

C.J. Redwine is a New York Times bestselling author of speculative fiction, a diehard lover of going to the movies, and a believer in fairytales. She keeps a six-foot tall Loki figure in her office and will argue the merits of Batman vs. Superman with anyone she meets. She once accidentally punched herself in the face on a ride at Disneyland. She doesn’t recommend it.

"With a promising opening—featuring a protagonist reminiscent of those in Kristin Cashore’s Graceling and Marie Rutkoski’s The Winner’s Curse—plus a zinger of an ending, this should have no trouble finding an audience. An engaging introduction to a female-forward fantasy world." — Kirkus Reviews

"A real treat to readers with an appetite for intense, carefully maneuvered political conversations conducted while dancing in gorgeous gowns." — Bulletin of the Center for Children’s Books

“C. J. Redwine has woven a tale of political machinations, devastating plot twists, and the most heartbreakingly delicious slow-burn romance I’ve read in a very long time. I tore through this book in a day, mourned when I ran out of pages, and flipped right back to the beginning to start again.”  — Livia Blackburne, New York Times bestselling author of Feather & Flame

“Smart, tense, and swiftly paced. This book is absolutely captivating.”  — Jodi Meadows, author of Nightrender and coauthor of the New York Times bestseller My Lady Jane

“A wildly lush fantasy ruled by a fascinating and ruthless heroine makes this slow-burn romance story pure magic. C. J. Redwine has outdone herself!”  — Mary Weber, bestselling author of Storm Siren and To Best the Boys