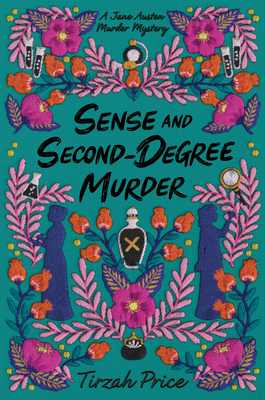 This is book number 2 in the Jane Austen Murder Mysteries series.

Jane Austen + mystery = a fun read! In the first book, Lizzie solves a murder while falling for Darcy. This is the second in the series. This time, the Dashwood sisters have to solve their father's murder and avoid the estate being entailed away...

In this second book of the Jane Austen Murder Mystery series, Tirzah Price takes readers for another fun, murderous romp through one of Austen’s beloved novels. Perfect for fans of The Lady Janies and Stalking Jack the Ripper. A Junior Library Guild pick!

When eighteen-year-old aspiring scientist Elinor Dashwood discovers her beloved father slumped over the desk of his office study, she knows his death means dire straits for the Dashwood women. To make matters worse, an outdated will entails his estate—including Norland & Company, the private investigation firm where her younger sister Marianne worked as her father’s partner and protégé—to their half-brother and his haughty wife, who waste no time in forcing the Dashwoods out of their home and into a cramped apartment on London’s Barton Street.

But before they go, the Dashwood sisters make a startling discovery: a suspicious substance in their father’s teacup—one that can only be described as poison. And poison, as Marianne’s father taught her, always points to murder.

It could be dangerous; it could ruin their reputations; and most importantly, it won’t bring back their father. But if the Dashwood sisters can combine their talents and bring their father’s murderer to justice, it may bring them all some comfort—and it might even lead to love.

“Pride and Premeditation is a romantic and entertaining page-turner, sure to delight readers of any genre.” —Kerri Maniscalco, #1 New York Times bestselling author of the Stalking Jack the Ripper series

Tirzah Price holds an MFA in Writing for Children & Young Adults from Vermont College of Fine Arts, and is a senior contributing editor at Book Riot. When she’s not writing, reading, or talking about YA books, she splits her time between experimenting in the kitchen and knitting. Originally from Michigan, she now lives in Iowa.

“A delightful reimagining of a classic that will be enjoyed by Jane Austen fans and mystery readers alike.” — School Library Journal

“An absolute treat. A thrilling Regency romp worth investigating.” — Booklist

“An engaging mystery that will find a ready audience among Jane Austen fans.” — Kirkus Reviews

Praise for Pride and Premeditation:  “Price’s lively debut adds feminist twists in this reimagining of Jane Austen’s Pride and Prejudice. A suspenseful and distinctive read." — Booklist

"Pride and Premeditation is a romantic and entertaining page-turner, sure to delight readers of any genre." — Kerri Maniscalco, #1 NYT bestselling author of the Stalking Jack the Ripper series

“Price’s YA debut is a clever, twisting murder mystery adaptation that will keep both Austen fans and newcomers on their toes.” — School Library Journal