The Hidden Power of F*cking Up (Hardcover) 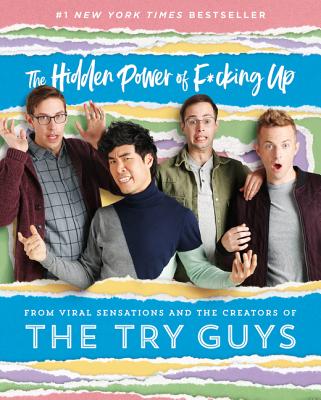 The Hidden Power of F*cking Up (Hardcover)

The Try Guys deliver their first book—an inspirational self-improvement guide that teaches you that the path to success is littered with humiliating detours, embarrassing mistakes, and unexpected failures.

To be our best selves, we must become secure in our insecurities. In The Hidden Power of F*cking Up, The Try Guys - Keith, Ned, Zach, and Eugene - reveal their philosophy of trying: how to fully embrace fear, foolishness, and embarrassment in an effort to understand how we all get paralyzed by a fear of failure. They’ll share how four shy, nerdy kids have dealt with their most poignant life struggles by attacking them head-on and reveal their - ahem - sure-fail strategies for achieving success.

But they’re not just here to talk; they’re actually going to put their advice to work. To demonstrate their unique self-improvement formula, they’ll each personally confront their deepest insecurities. A die-hard meat-lover goes vegan for the first time. A straight-laced father transforms into a fashionista. A perpetually single sidekick becomes the romantic lead. A child of divorce finally grows more intimate with his family. Through their insightful, emotional journeys and surprising, hilarious anecdotes, they’ll help you overcome your own self-doubt to become the best, most f*cked up version of yourself you can be!

The Try Guys is an Internet comedy series made up of Ned Fulmer, Keith Habersberger, Zach Kornfeld, and Eugene Lee Yang, who all write, direct, produce, and shoot each of their episodes. Their viral videos have garnered over 1 billion views across social media platforms.
“The Try Guys are experts at fully committing to things without knowing the results ahead of time, and that’s something everyone should learn to do. Now, they’ve written a book. Our assessment? Well, they tried.”
—  Rhett & Link, #1 New York Times bestselling authors of Rhett and Link’s Book of Mythicality

“The guys say that failure is more important than succeeding. And this book is a perfect example.”
— Mamrie Hart, New York Times bestselling author

“As someone who talks to spirits for a living, I can confirm they really should’ve hired a ghostwriter.”
— Tyler Henry, The Hollywood Medium