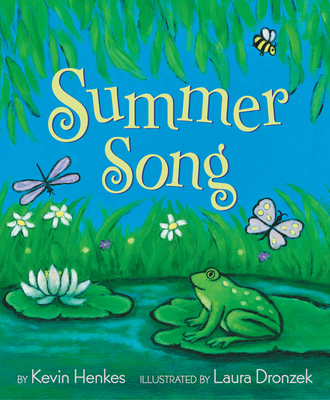 Summer Song joins In the Middle of Fall, Winter Is Here, and When Spring Comes to complete the seasonal series. This lovely story is full of the joy of summer sounds and sights.

“A vibrant and sophisticated ode to nature.” —Kirkus (starred review)

From Caldecott Medalist and Newbery Honor author Kevin Henkes and acclaimed painter Laura Dronzek, the bestselling and award-winning creators of Winter Is Here, When Spring Comes, and In the Middle of Fall, this book about summer celebrates the sights, sounds, and smells of the season.

Bees buzz, birds sing, and children roll in the grass and feel the heat of the summer sun. With striking verbal imagery, repetition, and alliteration, Kevin Henkes introduces basic concepts of language and the summer season. Laura Dronzek's glowing paintings beautifully illustrate the wonders of summer.

In the Middle of Fall, Winter Is Here, When Spring Comes, and Summer Song make for a beautiful quartet of seasonal-theme picture books to share at home or in the classroom. Ideal for introducing the season, for story time, and for bedtime reading.

Kevin Henkes has been praised both as a writer and as an illustrator and is the recipient of the Children’s Literature Legacy Award for his lasting contribution to literature for children. He received the Caldecott Medal for Kitten’s First Full Moon; Caldecott Honors for Waiting and Owen; two Newbery Honors—one for Olive’s Ocean and one for The Year of Billy Miller—and Geisel Honors for Waiting and Penny and Her Marble. His other books include Sun Flower Lion, A Parade of Elephants, Chrysanthemum, and the beloved Lilly’s Purple Plastic Purse. Kevin Henkes lives with his family in a house in Madison, Wisconsin.

Laura Dronzek is a painter whose work has been exhibited nationally. Her picture books include Moonlight, by Helen V. Griffith; It Is Night, by Phyllis Rowand; and White Is for Blueberry, by George Shannon.

“Henkes and Dronzek evoke the sights, sounds, and joys of summer, completing their celebratory seasonal quartet . . . [Summer Song] captures the magic of childhood summers, when colors are a song and a backyard can sing the wonders of the world.” — Kirkus Reviews (starred review)

“[A] conclusion to the seasonal quartet from the award-winning duo celebrates summer at last, reveling in its endless delights of green songs. . . . A luscious finale.” — Booklist (starred review)

“The creators of Winter Is Here, When Spring Comes, and In The Middle of Fall, are back with the final installment of the seasons series. A lyrical text pairs perfectly with bright illustrations in this wonderful read-aloud. . . . For storytime or sharing one on one.” — School Library Journal (starred review)

“Henkes celebrates the glories of summer . . . [Summer Song is] a sensory feast.” — Bulletin of the Center for Children’s Books (starred review)

“Henkes and Dronzek complete their seasonal quartet with an homage to summer. Henkes explores the pleasures of the senses . . . Encourage[s] readers to look and listen for layered wonder in summer’s freedom.” — Publishers Weekly

“Henkes and Dronzek complete their seasonal quartet with a joyful ode celebrating summer . . . Melodic and evocative, this book captures the essence of summer and its unique seasonal song.” — Horn Book Magazine

“Henkes and Dronzek make the sounds of summer—the lawn mowers, the sprinklers, the birds and the crickets—so vibrant we almost hear colors. Summer has never hummed so brightly. . . . Follow four diverse friends as they lie in meadows, chase fireflies, walk their dogs and look for frogs.” — New York Times Book Review