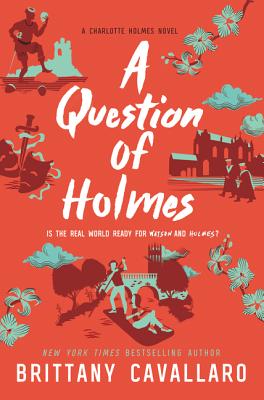 This is book number 4 in the Charlotte Holmes Novel series.

In the explosive conclusion to the New York Times bestselling Charlotte Holmes series, Holmes and Watson think they’re finally in the clear after graduating from Sherringford…but danger awaits in the hallowed halls of Oxford.

Charlotte Holmes and Jamie Watson finally have a chance to start over. With all the freedom their pre-college summer program provides and no one on their tail, the only mystery they need to solve, once and for all, is what they are to each other.

But upon their arrival at Oxford, Charlotte is immediately drawn into a new case: a series of accidents befell the theater program at Oxford last year, culminating in a young woman going missing on the night of a major performance.

The mystery has gone unsolved; the case is cold. And no one—least of all the girl’s peculiar, close-knit group of friends—is talking.

When Watson and Holmes join the theater program, the “accidents” start anew, giving them no choice but to throw themselves into the case. But as the complicated lines of friendship, love, and loyalty blur, time is running out—and tragedy waits in the wings.

Brittany Cavallaro is the author of the New York Times bestselling Charlotte Holmes series and the poetry collection Girl-King. She earned her BA in literature from Middlebury College and her MFA in poetry from the University of Wisconsin–Madison. She lives in Michigan. Find her at her website, www.brittanycavallaro.com, or on Twitter @skippingstones.

“A thrilling twist on a classic. Readers will be pulled in by both the riveting mystery and Charlotte Holmes, a brilliant heroine with secrets of her own.” — Maureen Johnson, New York Times bestselling author of the Shades of London series

“Beautiful prose, thrilling action, a touch of romance, and two complicated heroes to root for make this a not-to-be-missed sequel. Readers will be craving the final book in the trilogy.” — Booklist (starred review) on The Last of August

“Fans of the first Charlotte Holmes novel, A Study in Charlotte, will not be disappointed, and readers who are new to these characters will savor the fast-paced plot... This series is entirely un-put-downable. The Last of August will definitely leave readers anxiously awaiting the next installment.” — Voice of Youth Advocates (VOYA) on The Last of August

“Cavallaro’s crackling dialogue, well-drawn characters, and complicated relationships make this feel like a seamless and sharp renewal of Doyle’s series. An explosive mystery featuring a dynamic duo.” — Kirkus Reviews (starred review) on A Study in Charlotte

“Fans of television’s Elementary and Sherlock will avidly devour this book...a joyous excuse to watch one of the literary world’s most beloved pairings come together.” — Booklist on A Study in Charlotte