Make Them Cry: A Novel (Hardcover) 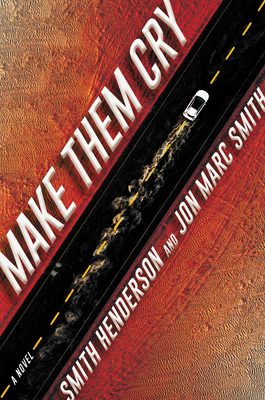 Make Them Cry: A Novel (Hardcover)

"A kinetic new thriller. . . . What starts as a violent thriller flips over and becomes an examination of the aftermath of armed conflict, in which sorting the good guys from the bad is less about uniforms and codes and more about personal morality." — Los Angeles Times

"Plenty of flaws in the main character but few in this satisfying thriller."
— Kirkus Reviews (starred review)

"Make Them Cry is one of those rare novels that is both artistically principled and marvelously fun to read, a combination of elegant, painstaking craftsmanship and suspenseful entertainment.  If that were not enough, it is also a book that reaches into the reader's heart.  It is not often that I can say, as I do now: I loved this novel."   — Tim O'Brien

“In their debut thriller Make Them Cry, Smith and Henderson burst onto the scene with muscular style, a blockbuster plot, and flair to spare. Intelligent, informed, important, humane, and remarkably witty, Make Them Cry arrives like a bullet train to your cerebral cortex...No doubt, Agent Diane Harbaugh, a bad-ass woman for our times, is here to stay and will take her rightful place alongside Bourne and Reacher before long.”  — Ivy Pochoda, author of Wonder Valley and These Women