A House in the Mountains: The Women Who Liberated Italy from Fascism (The Resistance Quartet #4) (Paperback) 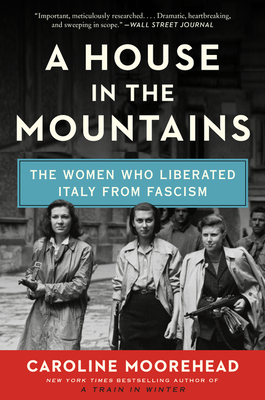 By Caroline Moorehead
$17.99
On Our Shelves Now

This is book number 4 in the The Resistance Quartet series.

This is the fourth and final book in a series Caroline Moorehead has written about the resistance. Now out in paperback, A House in the Mountains is an incredible story of four brave women who fought the German invaders and their fascist collaborators.

The acclaimed author of A Train in Winter returns with the "moving finale" (The Economist) of her Resistance Quartet—the powerful and inspiring true story of the women of the partisan resistance who fought against Italy’s fascist regime during World War II.

In the late summer of 1943, when Italy broke with the Germans and joined the Allies after suffering catastrophic military losses, an Italian Resistance was born. Four young Piedmontese women—Ada, Frida, Silvia and Bianca—living secretly in the mountains surrounding Turin, risked their lives to overthrow Italy’s authoritarian government. They were among the thousands of Italians who joined the Partisan effort to help the Allies liberate their country from the German invaders and their Fascist collaborators. What made this partisan war all the more extraordinary was the number of women—like this brave quartet—who swelled its ranks.

The bloody civil war that ensued pitted neighbor against neighbor, and revealed the best and worst in Italian society. The courage shown by the partisans was exemplary, and eventually bound them together into a coherent fighting force. But the death rattle of Mussolini’s two decades of Fascist rule—with its corruption, greed, and anti-Semitism—was unrelentingly violent and brutal.

Drawing on a rich cache of previously untranslated sources, prize-winning historian Caroline Moorehead illuminates the experiences of Ada, Frida, Silvia, and Bianca to tell the little-known story of the women of the Italian partisan movement fighting for freedom against fascism in all its forms, while Europe collapsed in smoldering ruins around them.

Caroline Moorehead is the New York Times bestselling author of A Bold and Dangerous Family, Village of Secrets, and A Train in Winter, which, with A House in the Mountains, form the Resistance Quartet. Human Cargo, her book about the international refugee crisis, was a finalist for the National Book Critics Circle Award. An acclaimed biographer, Moorehead has also written for the New York Review of Books, the Guardian, the Times, and the Independent. She lives in London and Italy.

“Important, meticulously researched… A House in the Mountains tells the untold story of the women of the Italian resistance…. Dramatic, heartbreaking and sweeping in scope, Ms. Moorehead’s book charts the experiences of these women in the wider context of the war in Italy.”
— Wall Street Journal

“The moving finale of a quartet of books on resistant to fascism.... Ms. Moorehead conveys the terror with understated power; she is equally good at conjuring the blurred morality of civil conflict.”
— The Economist

“Riveting…. The narrative is told with such verve that I frequently had goosebumps.”
— The Guardian

“Gripping and important…. Moorehead delicately unravels and interweaves the personal stories of several key women in the Italian resistance… giving us a compelling narrative that vividly describes who these women were and what they did for their country…. A House in the Mountains is something of a manifesto against neutrality, and a showcase of the boundless power of female passion. The women of the resistance still have so much to teach us today.”
— AirMail

“A highly satisfying conclusion to the author’s series. Excellent, well-presented evidence of the incalculable strengths and abilities of women to create and run a country.”
— Kirkus, starred review

“In this deeply moving, beautifully told history, biographer and historian Moorehead shares the story of northern Italian resistance during WWII, focusing on the anti-Fascists of Turin… [A] superb and significant chronicle.”
— Booklist, starred review

“Moorehead, in the final book of her “Resistance Quartet” series, tells the incredible story of the stafetta, women of the Italian resistance…. A fine history.”
— Library Journal, starred review

“Italy often gets short shrift in popular English-language histories about World War II, with the fighting in the country shrugged off as a sideshow to the Battle of Britain and the invasion of France. Caroline Moorehead takes advantage of this relative gap in the literature with the moving A House in the Mountains.”
— The Oregonian

“Moorehead paints a wonderfully vivid and moving portrait of the women of the Italian Resistance…. [An] excellent book.”
— The Sunday Times