The Earth Is All That Lasts: Crazy Horse, Sitting Bull, and the Last Stand of the Great Sioux Nation (Hardcover) 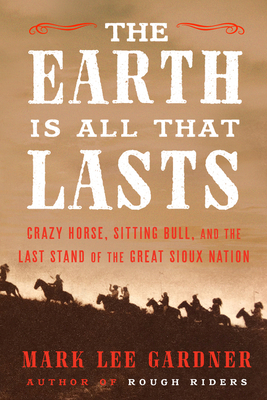 The Earth Is All That Lasts: Crazy Horse, Sitting Bull, and the Last Stand of the Great Sioux Nation (Hardcover)

A magisterial new history of the fierce final chapter of the "Indian Wars," told through the lives of the two most legendary and consequential American Indian leaders, who led Sioux resistance and triumphed at the Battle of Little Bighorn

Crazy Horse and Sitting Bull: Their names are iconic, their significance in American history undeniable. Together, these two Lakota chiefs, one a fabled warrior and the other a revered holy man, crushed George Armstrong Custer’s vaunted Seventh Cavalry. Yet their legendary victory at the Little Big Horn has overshadowed the rest of their rich and complex lives. Now, based on years of research and drawing on a wealth of previously ignored primary sources, award-winning author Mark Lee Gardner delivers the definitive chronicle, thrillingly told, of these extraordinary Indigenous leaders.

Both Crazy Horse and Sitting Bull were born and grew to manhood on the High Plains of the American West, in an era when vast herds of buffalo covered the earth, and when their nomadic people could move freely, following the buffalo and lording their fighting prowess over rival Indian nations. But as idyllic as this life seemed to be, neither man had known a time without whites. Fur traders and government explorers were the first to penetrate Sioux lands, but they were soon followed by a flood of white intruders: Oregon-California Trail travelers, gold seekers, railroad men, settlers, town builders—and Bluecoats. The buffalo population plummeted, disease spread by the white man decimated villages, and conflicts with the interlopers increased.

On June 25, 1876, in the valley of the Little Big Horn, Crazy Horse and Sitting Bull, and the warriors who were inspired to follow them, fought the last stand of the Sioux, a fierce and proud nation that had ruled the Great Plains for decades. It was their greatest victory, but it was also the beginning of the end for their treasured and sacred way of life. And in the years to come, both Crazy Horse and Sitting Bull, defiant to the end, would meet violent—and eerily similar—fates.

An essential new addition to the canon of Indigenous American history and literature of the West, The Earth Is All That Lasts is a grand saga, both triumphant and tragic, of two fascinating and heroic leaders struggling to maintain the freedom of their people against impossible odds.

Mark Lee Gardner is the author of Rough Riders, To Hell on a Fast Horse and Shot All to Hell, which received multiple awards, including a Spur Award from Western Writers of America. An authority on the American West, Gardner has appeared on PBS’s American Experience, as well as on the History Channel, AMC, the Travel Channel, and on NPR. He has written for National Geographic History, American Heritage, the Los Angeles Times, True West, and American Cowboy. He holds an MA in American Studies from the University of Wyoming and lives with his family at the foot of Pikes Peak.

"In a year crowded with excellent Western history and biography, Mark Lee Gardner’s The Earth Is All That Lasts stands above the rest as the most ambitious history/biography in both the Western genre and general American biography. His use of primary resources, especially those of Native peoples, is exemplary. I believe it is the finest dual biography of Crazy Horse and Sitting Bull ever written. — True West, Best of the West 2023: Best Nonfiction Book of the Year

"Gardner has done prodigious research into the Indian wars, recounting battle after battle, from the glory days to the end for the Lakotas at the infamous Ghost Dance." — Denver Post, "Books to Read this Month"

"Digging deeply into often-neglected primary sources, Mark Lee Gardner has written a lavish and powerful dual biography. ... Gardner fleshes out [Crazy Horse and Sitting Bull's] stories in nearly cinematic detail, giving us a fresh look into their characters, motivations, and passions. He also paints detailed images of the Western landscape and of all the diverse peoples who have made it — or are fighting to make it — their home. We’re gratefully left with a finer appreciation for the tragic struggle and selfless dedication of Crazy Horse and Sitting Bull." — Big Sky Journal

“Crazy Horse and Sitting Bull remain integral to the broader understanding of the Old West. … Gardner masterfully adds a fresh dimension to the lives of two men he views as freedom fighters.” — Wild West

"Excellent. ... Mark Lee Gardner is one of the best writers around. The pages fly by. ... A great read from a great author." — The Tombstone Epitaph

"With its clear prose and rich narrative ... The Earth Is All That Lasts effectively brings the Native American viewpoint to the fore, and it gives the reader a thorough account of important events in American history." — Military Heritage

"One of the finest books—in all genres—of the year." — True West

"The Earth is All That Lasts, a tale of two indigenous heroes, tells the story of resistance and hope in a time when it was most needed." — Buzzfeed

"A stirring account of the resistance campaign led by Lakota holy man Sitting Bull and war chief Crazy Horse in the 1870s. ... Sharp characterizations and evocative imagery...make this a standout portrait of the Old West." — Publishers Weekly

"Spirited history of the great Sioux war leaders of the late 19th century and their valiant stand against White encroachment. ... A strong work of Western history that strives to bring the Native American view to center stage." — Kirkus Reviews