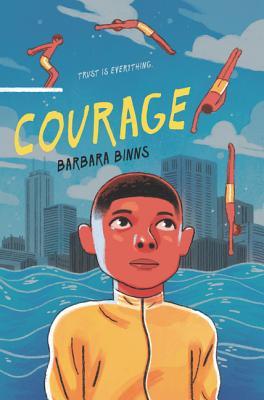 For fans of Jason Reynolds and Kwame Alexander, a poignant and timely novel about race, class, and second chances.

Ever since T’Shawn’s dad died, his mother has been struggling to keep the family afloat. So when he’s offered a spot on a prestigious diving team at the local private swim club, he knows that joining would only add another bill to the pile.

But T studies hard and never gets into trouble, so he thinks his mom might be willing to bear the cost… until he finds out that his older brother, Lamont, is getting released early from prison.

Luckily, T’Shawn is given a scholarship, and he can put all his frustration into diving practices. But when criminal activity increases in the neighborhood and people begin to suspect Lamont, T’Shawn begins to worry that maybe his brother hasn’t left his criminal past behind after all. Can they put the broken pieces of their relationship back together?

Barbara Binns grew up on Chicago’s south side and now lives and writes in a suburb of the city. She frequently contributes to the Almanac of Arlington Heights, a quarterly publication in Arlington Heights, Illinois. Her debut middle grade novel is Courage. She speaks to students, teachers, and librarians across the country at conferences and other events. Visit her website at www.babinns.com or follow her on Twitter @barbarabinns.

“Courage is exactly what the title advertises: the tale of a brave child navigating the rough waters of adolescence and family trauma despite the natural fears we all have. Dive into this touching story ASAP!” — Lamar Giles, Two-Time Edgar Award Nominee

“Anger, injustice, bullying, jealousy, and shame develop into trust, passion, and forgiveness within a family and a community in this fast-moving book. A mirror to urban black readers, a window to everyone else, Courage might even teach you something about diving.” — Patricia Hruby Powell, Author of The Robert F. Sibert Honor Book Josephine: The Dazzling Life of Josephine Baker

“A solid addition with a multifaceted look at the urban experience.” — Kirkus Reviews

“Binns’ first middle grade-novel uses its Chicago backdrop to thoughtfully showcase common but underexplored issues of family and community, with an ending that is hopeful and well deserved.” — Bulletin of the Center for Children’s Books

“This novel successfully tackles the realities of homelessness, police intimidation and violence, and racism, and it ultimately demonstrates that forgiveness requires courage.” — Publishers Weekly