The Midnight Cool: A Novel (Hardcover) 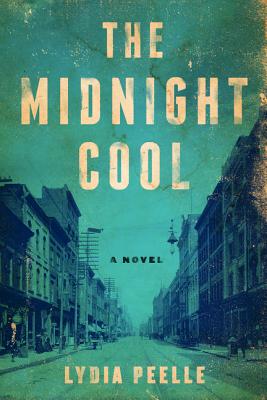 By Lydia Peelle
$26.99
Availability to be confirmed

“The journey of middle-aged swindler Billy and his young, idealistic partner Charles is a journey into the history and heart of the oft-maligned American dream. As the nation considers whether it will join World War I, Billy and Charles must weigh the merits of freedom against patriotic obligation, their life on the road against the temptation of putting down roots, and their diverging desires against the love and loyalty they bear for each other. As Billy says, 'I reckon that's the beauty and the shame of it, all at once.' Peelle's exploration of this beauty and shame is exquisitely wrought, richly populated, and ultimately devastating. I finished the novel in tears.”
— Mairead Small Staid, Literati Bookstore, Ann Arbor, MI

The Whiting Award—winning author of the story collection Reasons for and Advantages of Breathing delivers her enchanting debut novel, set in 1916 Tennessee: a rich and rewarding tale of two flawed yet endearing grifters who pursue women, wealth, and a surprisingly valuable commodity for the troops in Europe—mules.

A middle-aged Irish immigrant, Billy has a gift for illusion—making damaged objects look new. His companion, Charles, the smooth-tongued teenage son of a prostitute, is a natural salesman, just like the mythical father he’s never met. Longtime horse traders and partners, they’ve recently turned their talents to trading mules. But in the summer of 1916, these seasoned grifters skilled in the art of the underhanded deal have just been swindled themselves. They’re saddled with the one thing they may not be able to unload: a gorgeous, murderous black mare named The Midnight Cool.

Charles should have listened to Catherine, the beautiful, rebellious daughter of Leland Hatcher, the richest man in Richfield, Tennessee, and the former owner of The Midnight Cool. The horse would be worth a fortune—if she weren’t a verified man-killer who attacks on sight. Charles and Billy are rooted in this muggy town until they can miraculously retrain their recalcitrant mare, and in the shadow of the growing inevitability of war, their bond begins to fray. Falling in love with Catherine—and under the spell of the deceitful, wealthy Leland, the vision of himself he’d like to be—Charles pulls away from the older man.

Despite their growing distance, Billy and Charles find their business thriving when the war in Europe pushes the demand for mules sky-high and the United States enters the fight. But when a trade goes terribly wrong, Charles is forced to reevaluate his allegiance to his country, the moral implications of his lifestyle, his relationship with Catherine, and, ultimately, his mysterious and surprisingly deep connection to Billy.

Populated by spirited, memorable characters, The Midnight Cool is a startlingly profound tale of aspiration, loyalty, and love—and the eternal search for something lasting in a transitory world.

Lydia Peelle is the author of the novel The Midnight Cool and the story collection Reasons For and Advantages of Breathing, which received an honorable mention for the PEN/Hemingway Award. She received her MFA from the University of Virginia and has been a fellow at the Fine Arts Work Center in Provincetown, Ucross, Yaddo, and Ragdale. Peelle is a recipient of two Pushcart Prizes, an O. Henry Prize, the National Book Foundation's "5 Under 35" honor, and a Whiting Award, as well as the Anahid Award for Emerging Armenian-American writers. She lives in Nashville, Tennessee.

“A drama about the speciousness of the American dream and the costs of self-invention…The novel resists trite resolution. We may write our own stories, it suggests, but we can’t predict our endings.”
— New Yorker

“A poetic knitting of historical fiction and contemporary parable. . . . Peelle spins an American tale that explores the nature of love and tragedy, and the complicated connections between humans and animals.”
— Atlanta Journal-Constitution

“Fully imagined…affecting…Billy’s longer and fuller life makes him the more vibrant of the two characters, but the mysteries of Charles’s fate propel the book…THE MIDNIGHT COOL is undergirded by the considerable agility and charm of Peelle’s voice, and by her deeply attuned love of nature.”
— New York Times

“Peelle is a writer to watch. She deftly recounts the surprisingly fascinating history of mules, who bore the brunt of American labor during the period and whose resiliency and strength made them key players in the war effort, while also giving us a rich, satisfying novel, full of memorable characters grappling with love, loyalty, identity and the struggle to build something that lasts in a rapidly changing world.”
— Bookpage

“Dazzling…THE MIDNIGHT COOL is a masterfully crafted novel of victory and defeat, longing, discovery and treachery, featuring a cast of characters portrayed with such depth as to become memorable long after we close the cover.”
— Bookreporter.com

“I was taken in by every line in THE MIDNIGHT COOL. When I finished the last page I held the book tight for a moment and then flipped back to begin again. In this debut, Peelle uses her remarkable talent to remind the reader that we - all of us - are at the mercy of so many things beyond our control, and that life goes quickly, and that we only get one. I feel certain that only in Peelle’s hands could I feel as moved by the flicker of kinship between a horse and a mule as I did for the love between the human beings who live in these pages. This is a great story.”
— Mary Beth Keane, author of FEVER and THE WALKING PEOPLE

“Dark and delightful and achingly authentic, this is an exquisite story of love, war, sex, death, and mules. They say mules have the best features of donkeys and horses, and the same is true of THE MIDNIGHT COOL—it’s both tough and athletic, smart and fast, vigorous and lithe. I couldn’t ask for a more beautiful book.”
— Eleanor Henderson, author of TEN THOUSAND SAINTS

“Satisfying…[reads] like a cross between Faulkner’s ‘Spotted Horses’ and Fitzgerald’s ‘The Last of the Belles.’”
— Publishers Weekly

“I was taken in by every line in THE MIDNIGHT COOL. When I finished the last page I held the book tight for a moment and then flipped back to begin again. In this debut, Peelle uses her remarkable talent to remind the reader that we - all of us - are at the mercy of so many things beyond our control, and that life goes quickly, and that we only get one. I feel certain that only in Peelle’s hands could I feel as moved by the flicker of kinship between a horse and a mule as I did for the love between the human beings who live in these pages. This is a great story.”
— Kirkus

“Set in Tennessee in 1916, Lydia Peelle’s fiction debut is a wonderful tale of failure and success, striving and bootstrapping, and the ethical quandaries thereof in the United States a century ago…A wonderfully astute novel that observes human greed alongside the ineffable human desire for connection.”
— Read It Forward

“Nobody writes about equines like Lydia Peelle, a prose stylist we already know to be tough, tender, and exact. In THE MIDNIGHT COOL she restores to the American South just before World War I the thousands upon thousands of mules who did the nation’s work at that time, especially the famous Tennessee mule, uncommonly intelligent, uncannily strong, often big and beautiful. Without reproductive futures, mules, like most of us, know they only live once, and nothing but luck determines whether life will be cruel or kind. Against the backdrop of millions of mules being shipped off to war, Peelle tells a human love story that charms, instructs, and makes us cry for the squandered lives of animals and men.”
— Jaimy Gordon, author of LORD OF MISRULE, National Book Award Winner in Fiction

“THE MIDNIGHT COOL was written a hundred years after the events it describes, but it reads with the force and charisma of a writer describing her own time. It plunges you into the Tennessee of the 1910s, into the First World War, into high-stakes mule-trading, most affectingly into the ardors and errors of the people caught up in this extraordinary story. It makes you feel the urgency of every choice they make. The authority of Peelle’s prose is total.”
— Salvatore Scibona, author of THE END

“Peelle is a masterful storyteller who has honed her craft with short stories and the collection Reasons for and Advantages of Breathing. The Midnight Cool, her first novel, is rich with voice and in detail, the sense of place as familiar as her own backyard.”
— Memphis Flyer