No One Is Coming to Save Us: A Novel (Hardcover) 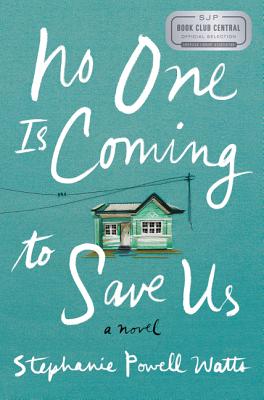 No One Is Coming to Save Us: A Novel (Hardcover)

JJ Ferguson has returned home to Pinewood, North Carolina, to build his dream house and to pursue his high school sweetheart, Ava. But as he reenters his former world, where factories are in decline and the legacy of Jim Crow is still felt, he’s startled to find that the people he once knew and loved have changed just as much as he has. Ava is now married and desperate for a baby, though she can’t seem to carry one to term. Her husband, Henry, has grown distant, frustrated by the demise of the furniture industry, which has outsourced to China and stripped the area of jobs. Ava’s mother, Sylvia, caters to and meddles with the lives of those around her, trying to fill the void left by her absent son. And Don, Sylvia’s unworthy but charming husband, just won’t stop hanging around.

JJ’s return—and his plans to build a huge mansion overlooking Pinewood and woo Ava—not only unsettles their family, but stirs up the entire town. The ostentatious wealth that JJ has attained forces everyone to consider the cards they’ve been dealt, what more they want and deserve, and how they might go about getting it. Can they reorient their lives to align with their wishes rather than their current realities? Or are they all already resigned to the rhythms of the particular lives they lead?

No One Is Coming to Save Us

is a revelatory debut from an insightful voice: with echoes of The Great Gatsby it is an arresting and powerful novel about an extended African American family and their colliding visions of the American Dream. In evocative prose, Stephanie Powell Watts has crafted a full and stunning portrait that combines a universally resonant story with an intimate glimpse into the hearts of one family.

“Watts is so captivating a writer. She’s unusually deft with dialogue…[The novel is] conveyed in a prose style that renders the common language of casual speech into natural poetry, blending intimate conversation with the rhythms of gossip, town legend, even song lyrics...An indelible story.” — Washington Post

“Watts’s book envisions a backwoods African-American version of The Great Gatsby. The circumstances of her characters are vastly unlike Fitzgerald’s, and those differences are what make this novel so moving.” — Janet Maslin, New York Times

“Imagine The Great Gatsby, only set in the contemporary American South, and retold with black characters, rather than the lily-white Long Island set. Watts’ retelling is smart, unsettling, at times hilarious, and a wonderful update to this classic American novel.” — Nylon Magazine

“Watts’ lyrical writing and seamless floating between characters’ viewpoints make for a harmonious narrative chorus. This feels like an important, largely missing part of our ongoing American story. Ultimately, Watts offers a human tale of resilience and the universally understood drive to hang on and do whatever it takes to save oneself.” — Chicago Review of Books

“Watts’ lyrical writing and seamless floating between characters’ viewpoints make for a harmonious narrative chorus. This feels like an important, largely missing part of our ongoing American story. Ultimately, Watts offers a human tale of resilience and the universally understood drive to hang on and do whatever it takes to save oneself.” — Booklist

“Patient yet rich...Watts powerfully depicts the struggles many Americans face trying to overcome life’s inevitable disappointments. But it’s the compassion she feels for her characters’ vulnerability and desires...that make the story so relevant and memorable.” — Publishers Weekly

“Inspired by The Great Gatsby, Watts loosely (masterfully, too) retells the American saga from the present day perspective of a once thriving African American community, breathing fresh life into a classic in a way that feels more essential, more moving than the original.” — Marie Claire

“They say if you love something, you should set it free. Not so in Stephanie Powell Watts’ powerful debut novel...This timely novel sheds its green light on economic and emotional heartbreak and the spaces where the living meet the dead.” — Vanity Fair

“[Watts’] great gift is her instinct for empathy...No One is Coming to Save Us proves to be not just a pleasure on its own terms, but also a compassionate and well-timed social commentary, wherein people like us endeavor, falter, and finally endure.” — O, the Oprah Magazine

“Watts excels at physical descriptions that give texture to the world of the novel… In the best possible way, this is the kind of book that makes a reader yearn for her next one.” — Time

“Watts, with her knowing touch and full-bodied prose, delivers a resonant meditation on life and the comfort both in dreaming and in moving forward.” — USA Today

“The characters will draw you in...From their perspective, we’re given a story about what happens when the past refuses to remain where we’ve buried it.” — Lisa Ko, author of The Leavers

“ A strong story of hope and pain and longing...Watts excels at showing the dense relationships among characters as they strive for hope and reinvention...A memorable and moving tale.” — Dallas Morning News

“The novel is infused with haunting lines about the persistence of the past and the danger of hope.” — Pittsburg Post-Gazette

“Brilliant, timely... The premise and plot are so clever... [Watts] has done something marvelous here, demonstrating that the truths illuminated in a classic American novel are just as powerful for black Americans.” — Minneapolis Star Tribune

“Terrific ... A timely, beautiful story that deserves a spot on the shelf next to F. Scott Fitzgerald.” — Minnesota Public Radio

“The Great Gatsby is revived in an accomplished debut novel...Watts spins a compelling tale of obsessive love and dashed dreams...Watts’ gently told story, like Fitzgerald’s, is only superficially about money but more acutely about the urgent, inexplicable needs that shape a life.” — Kirkus Reviews (starred review)

“Stephanie Powell Watts’s inspired reimagining of the novel long regarded as the American masterwork of the twentieth century gives soul, body, and voice to those left out of Scott Fitzgerald’s vision of the American dream... bold, brilliant, and timely. It is just what contemporary American fiction needs.” — Sigrid Nunez, author of The Last of Her Kind and Sempre Susan

“A grand debut novel full of characters who come into a reader’s mind and heart and never leave. Stephanie Powell Watts is a writer of wondrous skill, imagination and sensitivity, and No One Is Coming to Save Us is a beautiful testament to that.” — Edward P. Jones

“Rich with wry and poignant observations on human nature, family, and black experience in America. A powerful-and, in today’s world, necessary -perspective on the American dream and the possibility of beginning again.” — Celeste Ng, author of Everything I Never Told You

“There is wisdom, vital and profound, on every single page of this novel. It’s a story about home -- what it means to leave and whether you can return, and how it is people in the end who are its beating heart. Absolutely luminous.” — Cristina Henríquez, author of The Book of Unknown Americans