The Dressmaker's Dowry: A Novel (Paperback) 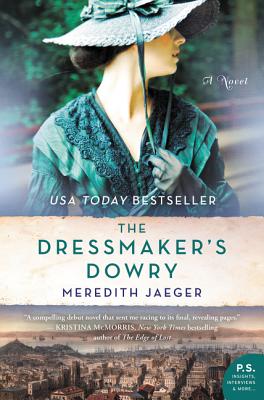 The Dressmaker's Dowry: A Novel (Paperback)

For readers of Lucinda Riley, Sarah Jio, or Susan Meissner, this gripping historical debut novel tells the story of two women: one, an immigrant seamstress who disappears from San Francisco’s gritty streets in 1876, and the other, a young woman in present day who must delve into the secrets of her husband’s wealthy family only to discover that she and the missing dressmaker might be connected in unexpected ways.

An exquisite ring, passed down through generations, connects two women who learn that love is a choice, and forgiveness is the key to freedom...

Immigrant dressmakers Hannelore Schaeffer and Margaret O'Brien struggle to provide food for their siblings, while mending delicate clothing for the city's most affluent ladies. When wealthy Lucas Havensworth enters the shop, Hanna's future is altered forever. With Margaret's encouragement and the power of a borrowed green dress, Hanna dares to see herself as worthy of him. Then Margaret disappears, and Hanna turns to Lucas. Braving the gritty streets of the Barbary Coast and daring to enter the mansions of Nob Hill, Hanna stumbles upon Margaret’s fate, forcing her to make a devastating decision...one that will echo through the generations.

In her elegant Marina apartment overlooking the Golden Gate Bridge, Sarah Havensworth struggles to complete the novel she quit her job for. Afraid to tell her husband of her writer’s block, Sarah is also hiding a darker secret—one that has haunted her for 14 years. Then a news headline from 1876 sparks inspiration: Missing Dressmakers Believed to be Murdered. Compelled to discover what happened to Hannelore and Margaret, Sarah returns to her roots as a journalist. Will her beautiful heirloom engagement ring uncover a connection to Hanna Schaeffer?

USA Today bestselling author Meredith Jaeger was born and raised in the San Francisco Bay Area, the daughter of a Swiss father and an American mother. While working for a San Francisco start-up, Meredith fulfilled her dream of writing a novel, the result of which was The Dressmaker,s Dowry. Meredith lives in Alameda with her husband, their infant daughter, and their bulldog.

“In this deliciously satisfying tale of love and resilience, Meredith Jaeger sweeps us into nineteenth century San Francisco, painting harrowing images of poverty alongside excesses of wealth, weaving a multi-generational novel impossible to put down.” — Lori Nelson Spielman, New York Times bestselling author of The Life List and Sweet Forgiveness

“Meredith Jaeger deftly intertwines two tales of love and loyalty and the vast lengths to which some will go to protect those they hold dear. A compelling debut novel that sent me racing to its final, revealing pages.” — Kristina McMorris, New York Times bestselling author of The Edge of Lost

“Jaeger’s debut sends readers quickly and completely into San Francisco’s history. Hanna, Margaret, and Sarah are the perfect storytellers, young women determined to find their place in the world. This gripping read is a satisfying exploration of the timeless nature of love and resilience.” — Booklist (starred review)

“Jaeger weaves her mystery over two timelines, luring the reader into a riveting tale of intrigue and suspense. Blending the past and present together through strong descriptions and colorful, exciting characters, Jaeger creates an engrossing novel. Readers will be captivated by her voice, that of a good old-fashioned storyteller.” — RT Book Reviews