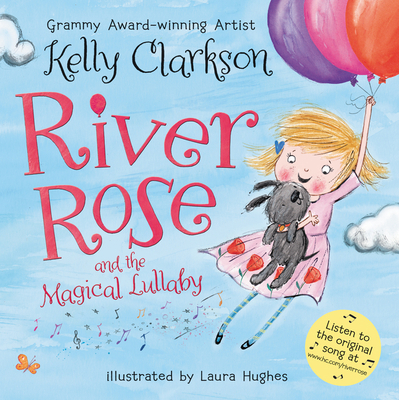 The original Idol, Grammy Award-winning singing sensation Kelly Clarkson, makes her picture book debut with this enchanting story inspired by her own daughter, River Rose. The book comes complete with a link so you can listen to an original lullaby written and performed by Kelly herself.

It's a big day for River Rose—she’s going to the zoo! But when she's too excited to fall asleep the night before, it takes a magical lullaby from Mom to send River Rose off on a dream adventure! Soon River Rose is hopscotching with the hippos, slip-sliding with the penguins, and dancing with the big brown bears. It's a rollicking, rhyming tale from America’s most beloved performer, recording star Kelly Clarkson. Come along on this bedtime journey with an original lullaby that parents and kids are sure to love!

River Rose landed down in the center of the zoo.
And right around the corner came a bouncy kangaroo.
He was just about to ask if there was something he could do,
when River Rose jumped up and said, "We've come to play with you!"

Grammy Award winner Kelly Clarkson has sold over twenty-one million albums worldwide and has had ten singles in the top ten on the Billboard Hot 100 singles chart. She is the recipient of three Grammy Awards, four American Music Awards, three MTV Video Music Awards, two Academy of Country Music Awards, and one CMA Award. Clarkson’s sixth studio album, Piece by Piece, debuted at number one on Billboard’s Top 200 chart, marking her third number-one debut on the chart. Clarkson’s 2011 effort, Stronger, was certified platinum, won the Grammy for Best Pop Vocal Album, and produced two top ten hits. “Stronger (What Doesn’t Kill You)” was number one on Billboard’s Hot 100 chart for three weeks, marking her third number one on the Hot 100 chart. Clarkson lives in Nashville, Tennessee, with her husband and children.

Laura Hughes is a children’s illustrator and a lover of pink wafers. She was born in Bath, United Kingdom, but now lives in London with her cat, Lulu. Laura nearly became a forensic scientist but simply couldn’t bear to put down her pencils.

“A cheerful effort with a tiny, heartfelt message.” — Kirkus Reviews