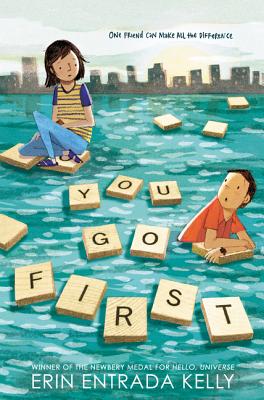 “Told in alternate chapters, You Go First is the story of Charlotte Lock and Ben Boxer, who are united by their love of online Scrabble. Lottie's dad is sick and her friend group is undergoing some painful changes. Ben's parents are divorcing, and he decides to run for student government to make new friends and implement changes to his school's recycling program. Their friendship is a point of stability during a period of upheaval for both kids. Kelly nails the heartbreaking isolation of growing up, the pain of bullying, and the complicated nature of familial and platonic relationships. You Go First gives voice to the vulnerability of growing up and offers a hopeful ending for middle grade readers of all ages.”
— Sarah Sawyers-Lovett, Big Blue Marble Bookstore, Philadelphia, PA

Twelve-year-old Charlotte Lockard and eleven-year-old Ben Boxer are separated by more than a thousand miles. On the surface, their lives seem vastly different—Charlotte lives near Philadelphia, Pennsylvania, while Ben is in the small town of Lanester, Louisiana.

Charlotte wants to be a geologist and keeps a rock collection in her room. Ben is obsessed with Harry Potter, presidential history, and recycling. But the two have more in common than they think. They’re both highly gifted. They’re both experiencing family turmoil. And they both sit alone at lunch.

During the course of one week, Charlotte and Ben—friends connected only by an online Scrabble game—will intersect in unexpected ways as they struggle to navigate the turmoil of middle school. The New York Times-bestselling novel You Go First reminds us that no matter how hard it is to keep our heads above troubled water, we never struggle alone.

Newbery Medalist Erin Entrada Kelly writes with an authentic, humorous, and irresistible voice. This engaging and character-driven story about growing up and finding your place in the world is for fans of Rebecca Stead and Rita Williams-Garcia.

New York Times–bestselling author Erin Entrada Kelly was awarded the Newbery Medal for Hello, Universe and a Newbery Honor for We Dream of Space. She grew up in Lake Charles, Louisiana, and now lives in Delaware. She is a professor of children’s literature in the graduate fiction and publishing programs at Rosemont College, where she earned her MFA, and is on the faculty at Hamline University. Her short fiction has been nominated for the Philippines Free Press Literary Award for Short Fiction and the Pushcart Prize. Erin Entrada Kelly’s debut novel, Blackbird Fly, was a Kirkus Best Book, a School Library Journal Best Book, an ALSC Notable Book, and an Asian/Pacific American Literature Honor Book. She is also the author of The Land of Forgotten Girls, winner of the Asian/Pacific American Award for Literature; You Go First, a Spring 2018 Indie Next Pick; Lalani of the Distant Sea, an Indie Next Pick; and Maybe Maybe Marisol Rainey, which she also illustrated. The author’s mother was the first in her family to immigrate to the United States from the Philippines, and she now lives in Cebu.

“Kelly knows her audience well and uses Ben and Charlotte’s alternating points of view to capture moments of tween anguish with searing honesty. ...Heartfelt and hopeful, this novel will encourage young readers to offer their hand in friendship to kids who, just like them, might be struggling.”
— School Library Journal (starred review)

“Readers will undoubtedly see themselves in these pages. ...A well-crafted, entertaining call for middle schoolers to find their voices and remain accountable in shaping their own social spheres.”
— Kirkus Reviews (starred review)

“A delicate look at friendship, bullying and coming of age. ...You Go First is a brilliant follow-up to Entrada Kelly’s Newbery winner Hello, Universe, and challenges readers to rethink the rules of friendship.”
— Shelf Awareness (starred review)

“The link between the two main characters becomes a subtle bond that enables each one to make it through an emotionally challenging week and come out stronger. Readers drawn by the intriguing jacket art will enjoy the novel’s perceptive dual narrative.”
— Booklist

“With character-revealing prose, Kelly holds readers’ attention as the narrative moves back and forth between her two fully realized protagonists and their intricately drawn home and school settings.”
— The Horn Book

“Kelly writes with sympathetic gravity of young people who feel lost in a world where they thought they knew the way. ...Readers will be glad to see that both [Charlotte and Ben] will manage to remain themselves and be okay.”
— Bulletin of the Center for Children’s Books

“Written by the recent winner of the Newbery Award, this novel speaks to the many kids who find themselves lonely in the midst of middle school.”
— Providence Journal

“Newbery Medal winner Kelly is spot-on in her depiction of isolation and self-doubt middle schoolers who don’t fit in can feel. She gives Charlotte and Ben’s e-friendship a contemporary hopefulness.”
— Cleveland Plain Dealer