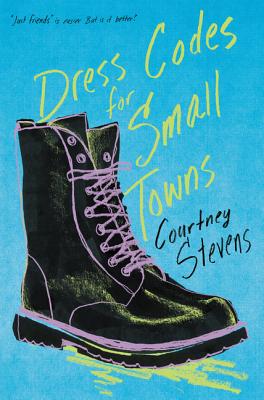 “A poetic love letter to the complexities of teenage identity, and the frustrations of growing up in a place where everything fits in a box—except you.”—David Arnold, New York Times bestselling author of Kids of Appetite

"Courtney Stevens firmly reasserts herself as a master storyteller of young adult fiction; crafting stories bursting with humor, heart, and the deepest sort of empathy."—Jeff Zentner, 2017 Morris Award Winner for The Serpent King

As the tomboy daughter of the town’s preacher, Billie McCaffrey has always struggled with fitting the mold of what everyone says she should be. She’d rather wear sweats, build furniture, and get into trouble with her solid group of friends: Woods, Mash, Davey, Fifty, and Janie Lee.

Always considered “one of the guys,” Billie doesn’t want anyone slapping a label on her sexuality before she can understand it herself. So she keeps her conflicting feelings to herself, for fear of ruining the group dynamic.

Except it’s not just about keeping the peace, it’s about understanding love on her terms—this thing that has always been defined as a boy and a girl falling in love and living happily ever after. For Billie—a box-defying dynamo—it’s not that simple.

Readers will be drawn to Billie as she comes to terms with the gray areas of love, gender, and friendship, in this John Hughes-esque exploration of sexual fluidity.

“No one writes family and heart and the South like Courtney Stevens. Dress Codes for Small Towns is a poetic love letter to the complexities of teenage identity, and the frustrations of growing up in a place where everything fits in a box—except you. This book cannot be contained.”
— David Arnold, New York Times bestselling author of Kids of Appetite

“Courtney Stevens has outdone herself capturing the complicated love of family, the sustaining love of friendship, and the most difficult love of all: the ability to love yourself for who you are. I dare you not to love this book.”
— Stephanie Appell, Manager of Books for Young Readers, Parnassus Books

“Courtney Stevens carries us into the best kind of mess: deep friendships, small town Southern gossip, unexpected garage art, and unfolding romantic identity. When I finished Dress Codes for Small Towns, you could hear my smile squeak from way across the room.”
— Jaye Robin Brown, author of Georgia Peaches and Other Forbidden Fruit

“Courtney Stevens delivers a cherished gift for our middle grades and high school readers. The gift of friendship. The gift of safe places. The gift of love. And, most importantly, the gift of acceptance.”
— Julie R. Stokes, Literacy Coordinator, Dalton Middle School

“With Dress Codes for Small Towns, Courtney Stevens firmly reasserts herself as a master storyteller of young adult fiction; crafting stories bursting with humor, heart, and the deepest sort of empathy.”
— Jeff Zentner, Morris Award Finalist for The Serpent King

“With singing prose and a rollicking plot, Stevens presents a rich palette of characters daring to brave familial and societal expectations to become what they’re meant to be. A spirited, timeless tale of teen self-discovery in those tense, formative high school moments, captured with grace, lyricism, and insight.”
— Kirkus Reviews (starred review)

“Stevens moves the narrative beyond small-town drama by building in-depth characters; examining boundaries between friendship and romance, and different generational approaches to religion; and confronting gender and sexual assumptions head-on. [A] beautifully written exploration of human connection, self-discovery, and living to the fullest.”
— Booklist (starred review)

“An instant classic. This is The Perks of Being a Wallflower without the angst, for a new generation. A good choice for every collection.”
— School Library Journal

“Small-town hijinks and the true-to-life interconnectedness of the characters bring warmth and humor to Stevens’s bighearted contemplation of love, family, and home.
— Publishers Weekly (starred review)

“Stevens shows the courage it often takes to find oneself and then to be true to that. This story could contribute to open discussions about gender and sexuality.”
— Voice of Youth Advocates (VOYA)