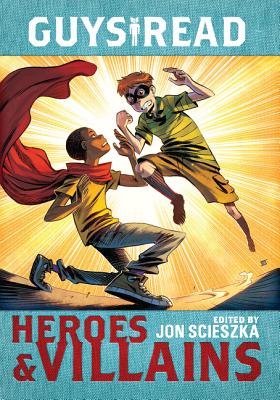 This is book number 7 in the Guys Read series.

Heroes and Villains, the seventh volume in Jon Scieszka’s Guys Read Library of Great Reading, is chock-full of adventure featuring an array of characters—with and without capes.

Featuring ten all-new, original stories that run the gamut from fantasy to comics to contemporary adventure to nonfiction, and featuring eleven of the most acclaimed, exciting writers for kids working today, this collection is the perfect book for you, whether you use your powers for good—or evil.

Christopher Healy is the author of The Hero’s Guide to Saving Your Kingdom, a New York Times Book Review Editor’s Choice, as well as its two sequels, The Hero’s Guide to Storming the Castle and The Hero’s Guide to Being an Outlaw. Before becoming a writer, he worked as an actor, an ad copywriter, a toy store display designer, a fact-checker, a dishwasher, a journalist, a costume shop clothing stitcher, a children’s entertainment reviewer, and a haunted house zombie. He lives in New Jersey with his wife, two children, and a dog named Duncan. You can visit him online at www.christopherhealy.com.

Sharon Creech has written twenty-one books for young people and is published in over twenty languages. Her books have received awards in both the U.S. and abroad, including the Newbery Medal for Walk Two Moons, the Newbery Honor for The Wanderer, and Great Britain’s Carnegie Medal for Ruby Holler.

Before beginning her writing career, Sharon Creech taught English for fifteen years in England and Switzerland. She and her husband now live in Maine, “lured there by our grandchildren,” Creech says.

Eugene Yelchin grew up in Saint Petersburg, Russia, where he trained as an artist and designed sets and costumes for the theater and ballet. His artwork has appeared in newspapers, magazines, and advertisements. He even drew the first polar bears used in the Coca-Cola commercials. He has also written and illustrated many children’s books. His first novel, Breaking Stalin’s Nose, received a Newbery Honor and was named one of the best books of 2011 by The Horn Book, and his novel The Haunting of Falcon House was a Golden Kite Award winner.

Jack Gantos is the celebrated author of Joey Pigza Loses Control, a Newbery Honor Book. He is also the author of the popular picture books about Rotten Ralph, and Jack's Black Book, the latest in his acclaimed series of semi-autobiographical story collections featuring his alter ego, Jack Henry. Mr. Gantos lives with his wife and daughter in Boston, Massachusetts.

Lemony Snicket had an unusual education which may or may not explain his ability to evade capture. He is the author of the 13 volumes in A Series of Unfortunate Events, several picture books including The Dark, and the books collectively titled All The Wrong Questions.