Bottle of Lies: The Inside Story of the Generic Drug Boom (Hardcover) 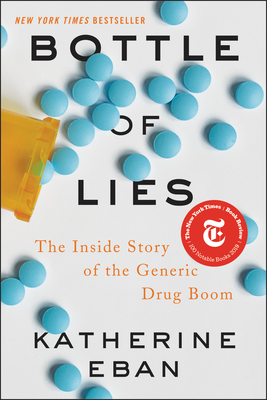 By Katherine Eban
$28.99
Availability to be confirmed

New postscript by the author

From an award-winning journalist, an explosive narrative investigation of the generic drug boom that reveals fraud and life-threatening dangers on a global scale—The Jungle for pharmaceuticals

Many have hailed the widespread use of generic drugs as one of the most important public-health developments of the twenty-first century. Today, almost 90 percent of our pharmaceutical market is comprised of generics, the majority of which are manufactured overseas. We have been reassured by our doctors, our pharmacists and our regulators that generic drugs are identical to their brand-name counterparts, just less expensive. But is this really true?

Katherine Eban’s Bottle of Lies exposes the deceit behind generic-drug manufacturing—and the attendant risks for global health. Drawing on exclusive accounts from whistleblowers and regulators, as well as thousands of pages of confidential FDA documents, Eban reveals an industry where fraud is rampant, companies routinely falsify data, and executives circumvent almost every principle of safe manufacturing to minimize cost and maximize profit, confident in their ability to fool inspectors. Meanwhile, patients unwittingly consume medicine with unpredictable and dangerous effects.

The story of generic drugs is truly global. It connects middle America to China, India, sub-Saharan Africa and Brazil, and represents the ultimate litmus test of globalization: what are the risks of moving drug manufacturing offshore, and are they worth the savings?

A decade-long investigation with international sweep, high-stakes brinkmanship and big money at its core, Bottle of Lies reveals how the world’s greatest public-health innovation has become one of its most astonishing swindles.

KATHERINE EBAN, an investigative journalist, is a Fortune magazine contributor and Andrew Carnegie fellow. She has also written for Vanity Fair, the New York Times, Self, The Nation, the New York Observer and other publications. She is the author of Dangerous Doses: A True Story of Cops, Counterfeiters, and the Contamination of America’s Drug Supply, and lectures frequently on the topic of pharmaceutical integrity. Educated at Brown University and Oxford, where she was a Rhodes Scholar, she lives in Brooklyn with her husband and two daughters.

“This book will save lives...What Rachel Carson did for our understanding of the perils facing the environment Katherine Eban has now done for our understanding of the threats to our health from the drugs we take every day. Bottle of Lies is Katherine Eban’s masterwork of global investigative reporting.”
— James Risen, Pulitzer Prize winner and author of Pay Any Price and State of War

“A shocking exposé of corporate greed, arrogance, and eagerness to exploit the weak for profit....Bottle of Lies is an important work of investigative journalism. Anyone who takes prescription drugs should read it.”
— Eric Schlosser, author of Command and Control and Fast Food Nation

“Bottle of Lies is a tour de force of dogged reporting. In her bracing, panoramic account, Katherine Eban expertly unspools a colossal fraud with momentous implications for public health...This book is so alarming in places that it reads like a dystopian medical thriller. But it’s true.”
— Patrick Radden Keefe, author of Say Nothing and The Snakehead

“Gripping...Riveting and increasingly foreboding...Eban’s pacing, along with a structure that makes this astonishingly complex story easy to follow, gives the book a rough, unforced elegance...An invaluable exposé, a reportorial tour de force and a well-turned epic.”
— New York Times

“An urgent, alarming work of health reporting that will make you question every drug in your medicine cabinet.”
— Kirkus Reviews (starred review)

“A shocking and masterful work of global investigative reporting…. This is a book that should inform and alarm the many millions of Americans (and their doctors) who use generic drugs.”
— Overseas Press Club, in awarding Bottle of Lies the Cornelius Ryan Award for best non-fiction book on International Affairs