Around the Table: Recipes and Inspiration for Gatherings Throughout the Year (Hardcover) 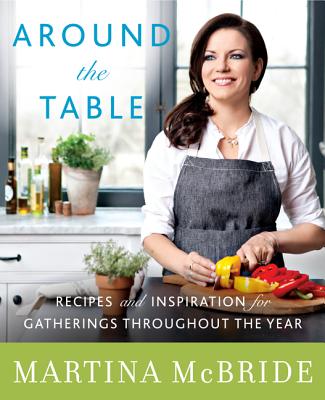 Around the Table: Recipes and Inspiration for Gatherings Throughout the Year (Hardcover)

The widely acclaimed country music megastar Martina McBride invites fans into her home, her kitchen, and her family’s traditions in this, her first-ever book—a beautiful full-color illustrated collection of culinary celebrations, complete with cherished recipes and menus for cooking and entertaining at home.

One of country music’s most beloved singers, Martina McBride enjoys entertaining her millions of fans on the road. But at home she loves entertaining a different way, hosting her famous gatherings for friends and family. Beneath the glam, glitter, and wild success, Martina remains a farm girl true to her roots and the country hospitality with which she was raised.

Now, in her first ever book, Martina shares the inventive party ideas for all seasons that have made her a beloved entertainer at home. Each celebration is accompanied by Martina’s mouthwatering recipes, tips and tricks, practical menu planning advice, décor inspiration, and fun ideas for keeping guests entertained. A busy mom of three, Martina understands that hosting needs to be easy to be enjoyable, and all of her recipes come with cooking gameplans.

Dozens of stunning color photos invite readers into Martina’s home and around her table all through the year. With this delightful entertaining cookbook, fans everywhere can join in the fun, whether it’s a Red, White, and Blue Backyard Cookout, a Retro Valentine’s Day Supper Club or a night of Mistletoe and Martinis. Chock full of personal anecdotes and memories, this delightful keepsake is infused with Martina’s girl-next-door spirit and irresistible charm.

Martina McBride, a Kansas native who made her debut on the charts in 1992, has earned a string of hits across twelve albums, including "Blessed," "Independence Day," "A Broken Wing," "Wild Angels," "Concrete Angel," and "I'm Gonna Love You Through It." To date she has a tie for the most Country Music Association Female Vocalist of the Year Awards with four wins, has been named Academy of Country Music Top Female Vocalist three times, and has been nominated for fourteen Grammy Awards. She lives in Nashville, Tennessee, with her husband and three daughters.

Katherine Cobbs left her job at National Geographic for culinary school on the West Coast in order to combine her love of food with her passion for writing. For two decades, she has written and developed recipes for magazines and books, collaborating with James Beard Award winners, including Chef Frank Stitt on his two cookbooks, Frank Stitt's Southern Table and Frank Stitt's Bottega Favorita, and Chef Chris Hastings on The Hot and Hot Fish Club Cookbook. She also served as Chef Todd English's editor on Cooking in Everyday English. She resides in Birmingham, Alabama, with (like Martina) her husband, John, and three daughters.